Hoorah!  Shiny Brite is wrapped and off to Allison’s for the quilting. 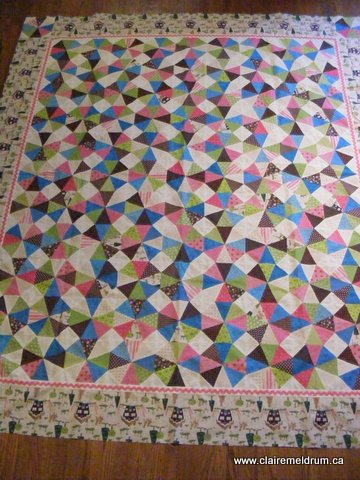 It had been sitting, all the blocks trimmed and completed, since August.  You can see how far I’ve come since my last update on this project.  But all through the fall, every time I shifted the box the pieces lived in to get at something else, I felt guilty. 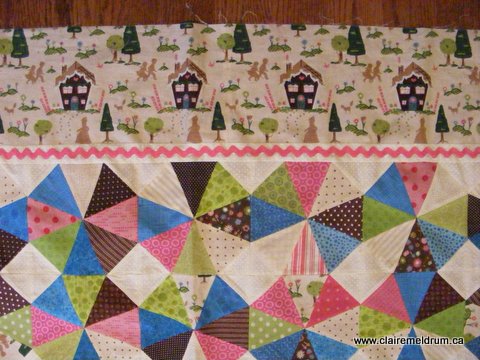 But school has to be a priority (and yes, I did very well in my graduate classes last term, although if I never read Shirley again I’ll be OK with that).  So once my coursework was wrapped up in December, I went at Shiny Brite with a vengeance. 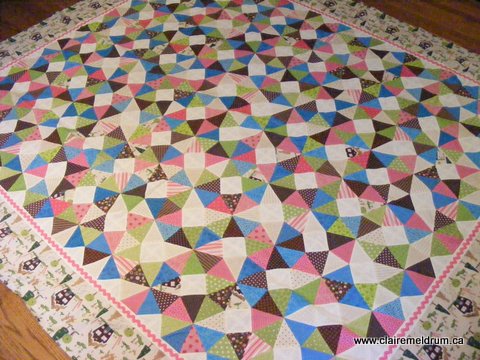 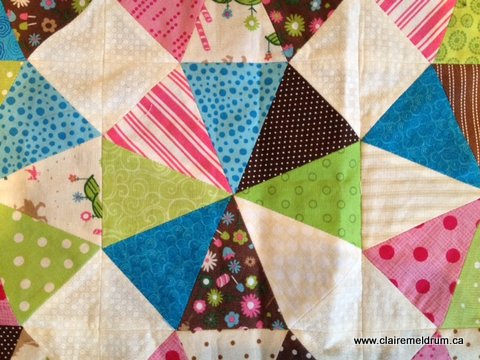 This left me with extra kaleidoscope blocks.  It actually worked out well because Carrie Nelson’s quilt was finished with a piano key border but I wanted to feature the fabric that had inspired the colour palette in the first place – an OOP Connecting Threads fabric called “To Grandmother’s House”. 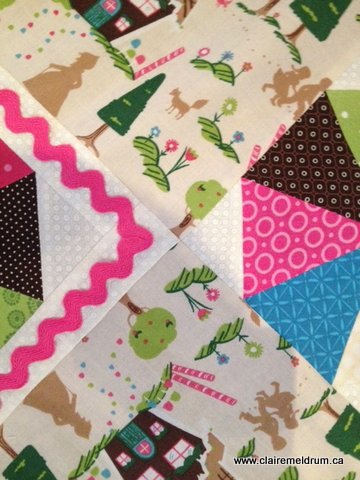 I ended up fussy cutting the border to feature the gingerbread houses.  They look great but it did create a dilemma while I was considering what to do with the borders.  The fussy cutting would take up a lot of fabric – about 1 3/4 yds, since each of the eight strips took up almost 11 inches in total (6 1/2 for the pattern, plus the excess needed to match).  This meant I didn’t have enough for me to use the same fabric for the backing, as I’d originally intended.   In the end, I decided that unmatched borders would bug me a lot more than not having a matching backing print so I went with the fussy cut borders and picked up a small all-over pink print for the backing.  The excess gingerbread fabric has found a good home though – my mother sews aprons for charity and she’ll be able to get 3 aprons out of my remainders.

Rather than mitre my corners, I decided to put my extra blocks to use, putting a kaleidoscope block in each corner.  Easier than mitring and it connected the two elements together visually. 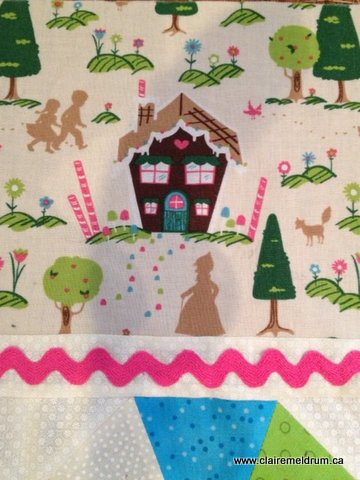 The last thing I added was the ric-rac.  I followed Carrie’s instructions and used the off-white print as the inner sashing.  But it just seemed to fade away into insignificance, especially because the off-white fabric and the cream background were so similar.  I didn’t have enough of the candy cane stripe fabric to use it instead.  In the end I went with a 3/4″ wide hot pink ric-rac and it was just the trick.

A quick preshrink, a daub of fabric glue and it was in place.  I don’t know if you can see it in these images but I actually stitched the trim down on both sides.  I found the perfect specialty stitch on my machine and after a little testing, found the settings that allowed me to stitch the ric-rac down permanently with the serpentine stitch.   This should prevent the edges from curling up after the quilt gets washed.  I hate when the points curl up on ric-rac – it just looks weird. 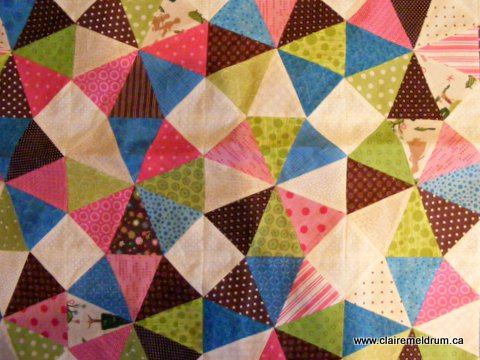 The quilting will be pretty straight forward.  Allison and I decided on a candy-like swirl in each of the blocks, and a 1″ cross hatching in the border.  The small on-point squares will have a small flower motif, to pick up the border print.  It should be fun and lively, in keeping with the fabrics.

In all, I’m pleased with my first UFO-FO (unfinished object finished off :)) of 2014.  I’ve got a few more to show you in the next while, so stay tuned for updates here on my blog.