Posted by Claire on Jan 03 2014, in Smocking, Smocking Plates

I was able to squeeze in the third and fourth lessons for Nancy’s Smocked Laces course over the past couple of months.

Now that I’ve gotten it back, I thought I’d show you the new laces I worked and the two I designed.  If you missed my earlier overview, check out my post Smocked Laces for all the nitty gritty details about what/where/why.

Here’s the sampler in its entirety.  The wonky shape shows what happens when I don’t tie off using a pleating board and pins.  I just wung? (winged?) it.  Eh, it’s a sampler and Nancy was happier with my density this time, so it’s fine. 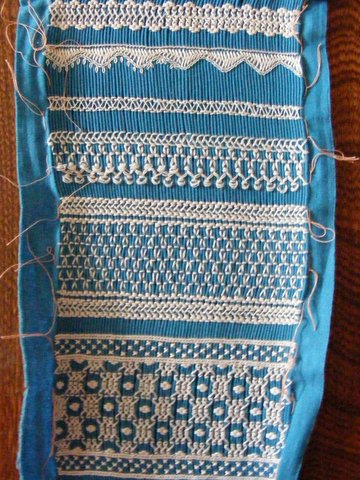 The top four designs are Nancy’s.  They’re lovely because they’re so narrow.  I can definitely see myself using them on say an infant gown or on a sleeve where you just want a touch of detail, not a billboard’s worth. 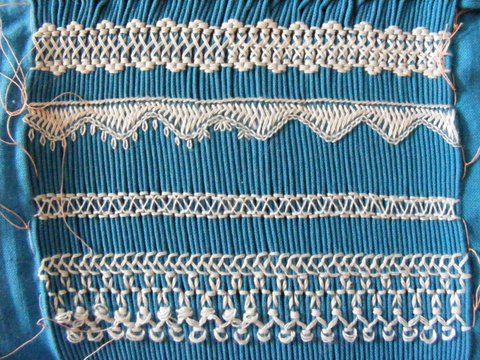 Here in the close-up, you can see the closed herringbone.  On the right side, I worked raised chain stitch on top of the herringbone, adding yet another layer of texture.  The lace below is much more fluid, and has a lot of movement, between the cretan stitch, the scalloped chain border and the detached chain flourishes. 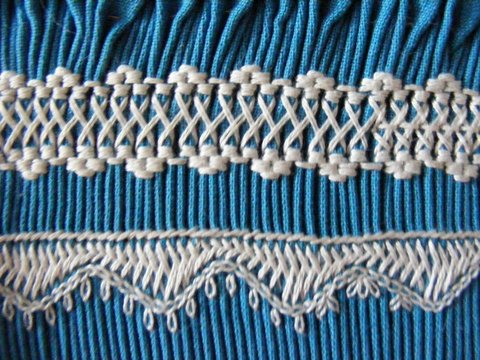 Here are the close-ups of her third and fourth designs.  Amazing how something as simple as mirrored cable and a couple of strands of interwoven floss can look so much like lace.

And then we get to Nancy’s last last design.  A bit of featherstitch, some VanDyke waves and some loopy bits et voila.  But for some reason, I had trouble with this lace.   See those little loopy whatchamacallits all along the bottom?  I will not tell you how many times I ripped the  things out.  If I do, they’ll take my blog away.  Gross loop stitching incompetence.  Nancy was kind in her comments and simply suggested I make them looser next time but if this is a learning experience, then I’ve learned, I don’t like smocking loops.  At all. 🙂 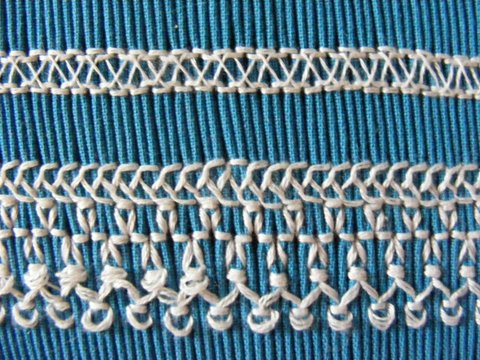 For my own designs, I decided to try out a couple of ideas that I wanted to test for my final project.   The pattern I’m going to be using doesn’t have a lot of depth at the chest for a really deep full (or even partial) yoke and the princess lines of the pattern make a fairly narrow area, too.  So I wanted to try to come up with a design that was compact, with a good balance of density and impact.  I will be smocking with ecru floss on a fabric with a lot less contrast than the teal I’ve been using for the samplers, so the design needed enough ‘oomph’ to clearly read as lace without relying on a strongly coloured backdrop.   Here are the contenders, which I both really like. 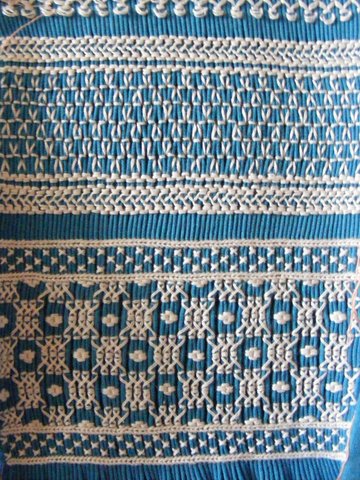 For some reason, I neglected to take a close-up of the Van Dyke lace on the top all by itself but I’ll describe it and I think it’s clear enough in the picture above.  Any questions, just shout.  It’s simple as simple can be.  Three identical rows of Van Dyke wave bordered by three rows of cable stitch.  In between the outer two rows of cable, I worked straight feather with two strands. Classic and very understated.

It wasn’t the ultimate winner, though.  This lace design was.  It has a lot of elements – wheat stitch, alternating closed herringbone, cross stitch, and double flowerettes – but it has an overall unity, with the repetition of the dot motif and the contrast between smocked and open space that I really, really like and that I think will be beautiful on my final smocked lace project. 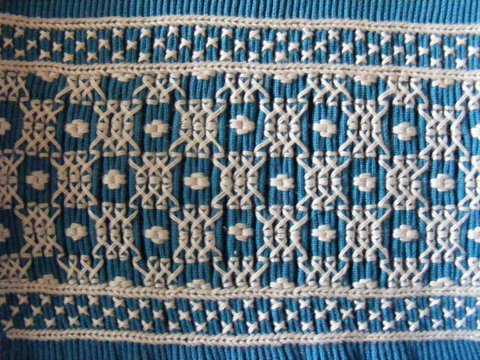 And because I’ve had a lot of interest in my smocked laces (I can’t believe how many times images from the earlier post have been repinned on Pinterest and the traffic it generated has been considerable), I’m also making this smocked lace design available here as a free smocking plate.

You can download the smocking plate by clicking here.  It prints to 3 8 1/2 x 11″ sheets and includes a close-up image, a graph and written directions.  As always, best behaviour in the sandbox.  You’re welcome to share the design with friends, but please credit my website as the source and don’t repost or resell the design.