Posted by Claire on Jul 27 2013, in Quilting, Sewing for Children, WIP 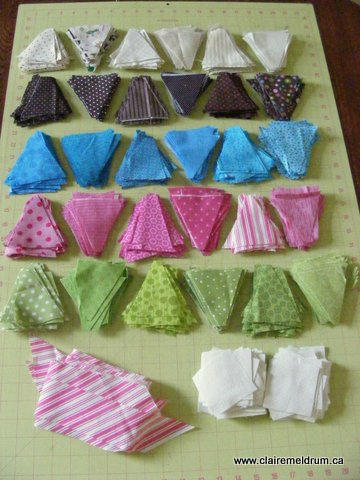 I’ve finally emerged from my earth-tone, vintage inspired phase and am enjoying working with the fun colours in Shiny Brite.  Of course, my output has dropped dramatically since school got out.  It’s a little difficult to focus on your hobbies when you’ve got work and two active boys to keep up with but I’m squeezing time here and there and progress is being made.

Check out the binding in the lower left corner.  It’s a perfect pink and white candy stripe – I was thrilled when I finally found it online.  I’m even using it in the blocks, too.

I’m enlarging the overall size of the quilt to twin (Carrie’s version is a mini quilt, smaller even than crib size) but the finished block size is remaining the same at 6″.

I’d expected to start this quilt back in June but a mathematical error on my part (when will I learn that shortcuts that appear brilliant at 11pm are never as good as they appear the next morning?) meant that I cut about a third of the triangles at the wrong angle.  Grrr.  I was angry at myself and the fabric and set them aside and worked on other projects until I could re-collect the fabrics that I needed for this quilt. 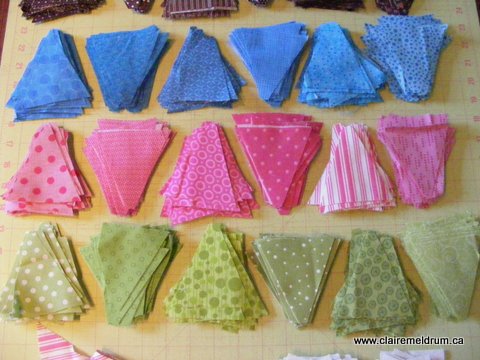 Happily for me, the angle that I’d originally cut the triangles at was larger than the correct angle and I was able to salvage the fabric that I’d thought wasted which put me in a much better mood to tackle this quilt.

If you’re interested in upsizing Shiny Brite to twin-sized, here’s the math I used to enlarge it:

Completely by luck, I ended up with thirty different fabrics (6 different prints of five different colours: browns, creams, pinks, turquoise and bright greens).  30 divides amazingly well into 960; I had to cut 32 triangles of each colour.  Carrie includes a paper template with the pattern.  I printed two copies and taped them to my smallest clear ruler.  It made cutting the triangles easier although a thousand of anything gets pretty tiresome after a while 🙂

If you’re collecting fabrics yourself, a fat quarter cut into four 3 1/2″ x 21″ strips will yield 32 triangles comfortably.  For yardage, I found 8-9″ sufficient.  From that, I cut two 3 1/2″ x WOF strips before subcutting the triangles.

I’ve finished chain piecing the first step, putting the triangles into pairs.  They make a very large pile on my ironing board. 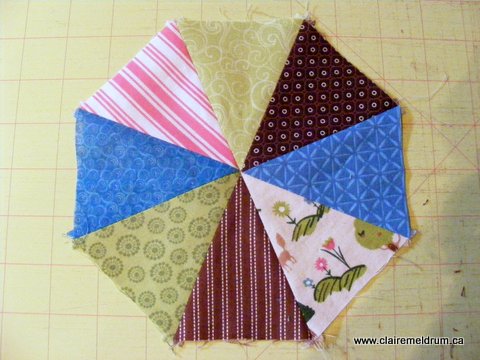 Here’s one scrappy kaleidoscope block, because I was impatient to see what it would look like.  Only 119 to go!