No.  Really.  Stop laughing.  I’m serious! I am hereby announcing that I intend to finish all of the UFOs currently lurking in my stash and in my sewing room before the end of 2014. 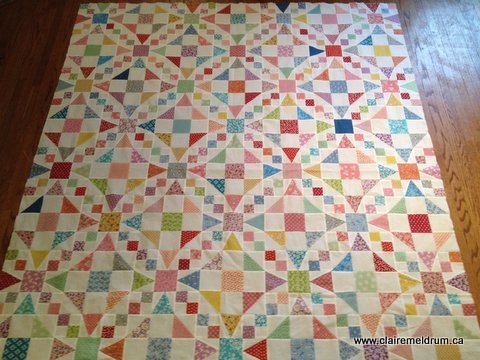 I already finished up Shiny Brite. Now here’s a look at another quilt that I managed to put together over the Christmas holidays. It’s called Emily’s Wedding Quilt (and no, I’m not getting married, no one I know is getting married – I just liked the pattern). It’s a pattern from the May/June issue of Fons and Porter’s Lover of Quilting magazine. The same issue, in fact, that Power of Four, came from. Happily, this quilt’s instructions were actually accurate and it went together in almost no time at all.

The one thing I changed was the size. The original design in the magazine was 115″ x 115″. Goodness gracious, I could hide a small brigade under a quilt that size.   Instead, I made a smaller version (63 x 81), basing it on a free variation that was posted on the F&P website. 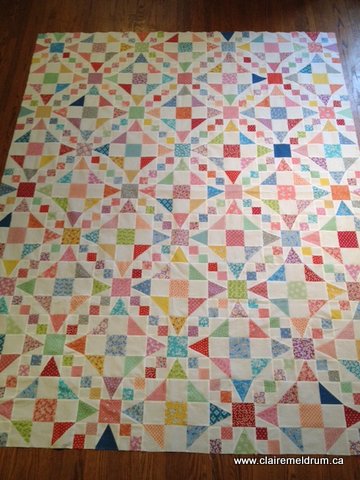 The variation, called Aunt Gracie’s Garden, was much more manageable.  It did feature an applique border, but in the end, I decided to leave it off, and simply go with the reproduction fabrics.   It softens the ‘old-timey’ look that this quilt has, what with all the 1930s style prints, updating it a little with the more modern, borderless layout. 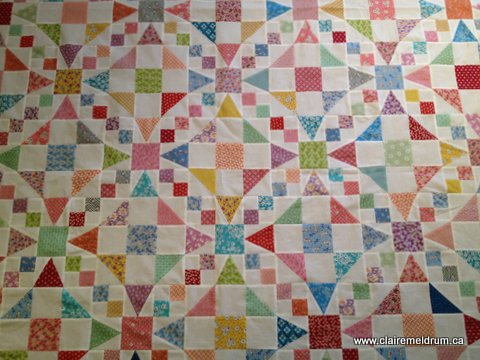 Some of the fabrics were stash, but primarily, I sourced the fabrics for this quilt piecemeal.   A couple of fat quarters from this shop.  8″ of yardage at another.   It gave me something to buy when I visited shops over the summer without obliging me to buy yards and yards of fabric that I might or might not end up using.  When I had 40 or so different prints, I cut the blocks. 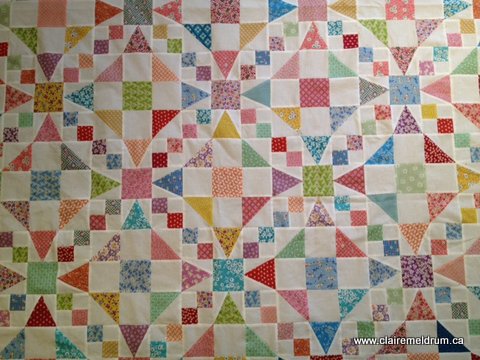 This quilt was also an excuse to try some specialty rulers.  When Joann’s was having a 50% off sale, I bought a half square triangle ruler and a tri-rec ruler set.  I used both for the two different blocks in this quilt and I have to say, I liked them a lot.  It certainly sped up the cutting time and the results were, by and large, accurate.  A couple of the pointy pointy wedges were a little off, but that could be operator error. 🙂  If I was completing an heirloom quality quilt, I’d probably still go with marking the backs of squares 7/8″ larger than the finished size but for this type of casual quilt, the rulers both worked very well. 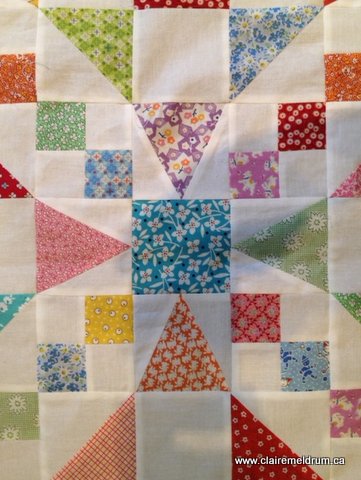 Then all the fabrics sat and sat and sat in their little baggies and nothing much happened to them until I finally tackled the quilt over the holidays.  It went together effortlessly and was done almost before I could believe it.  Seriously, a couple of days at the machine and it was done except for assembling the rows.  That’s a real benefit when your sewing time is limited. 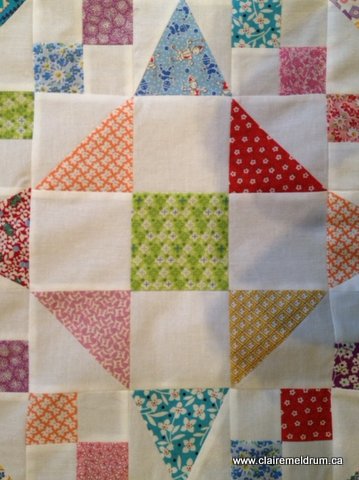 The backing is an out of print 1930s floral print that I got for a steal at Lens Mill.  For binding I’ll be using a soft purple and white stripe – it was stash but it matched perfectly.  The boys were surprisingly enamoured of this quilt, given all the pastels its featured.  But they loved the optical illusion factor and spent lots of time ‘finding’ the different circles hidden throughout the quilt.  Allison is going to be quilting it to emphasize that sense of movement and there will be a floral stencil in the centre of each ‘circle’.  So the UFO count now stands at 2 for 2014.   I’m back at school now, teaching and doing my PhD coursework, so my free time is greatly curtailed but I’m making progress on a couple of other UFOs, including a cute smocked outfit that I hope to show you shortly.