Posted by Claire on Sep 15 2012, in Holidays, Pattern review, Smocking

Did you miss me?

I know, I know, I’ve been shamefully remiss the last six weeks or so, with only one post to my credit.  For a while, I kept expecting to see internet rumours about my demise to start circulating.  LOL.  I was sort of hoping for something heroic or interesting.  While bungee-jumping  in Nepal (except I loathe heights).  Or while saving a pod of whales (except I live in a land-locked province).   Just not while buried under a pile of unfolded laundry or rabid dust bunnies.  Girl’s gotta think of her posthumous reputation, after all. 😉 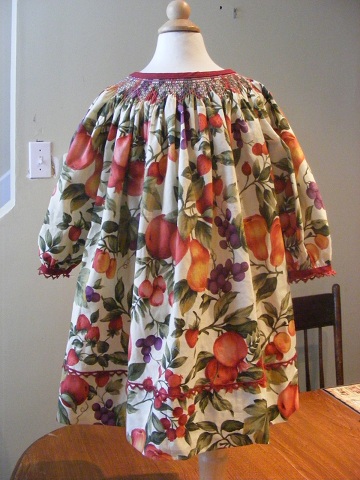 I’ve just been busy.   We spent some time on holiday at the end of August, we’ve been in perma-reno mode here at home when a small project ballooned into a big project seemingly overnight, started a new term at the college where I’m teaching three days a week and the boys have activities that require a taxi driver on a very frequent basis.

So, what have I done during my absence from the WWW?

1.  Took my Plaid Stars quilt to Alison to be quilted

2.  Completed all of the smocking and about half of the writing of a new correspondence course proposal I’m putting together for SAGA.  Can’t give too many details right now but it’s coming together nicely and I hope it will be well received

3.  Finished David’s Hallowe’en costume and started on Andrew’s.   That’s one Luke Skywalker the pilot complete, one Kermit in a tux to go.  Pics to come.

4.  Finished the third and fourth lesson of my Exotic Smocking correspondence course and started on the final garment, a really cute corduroy jumper

5.  Finished two Sew Beautiful articles, and started on a third

6.  Started on “Spring Bouquet” – the applique quilt that I’ve been drooling over for months now.  No pics today but I promise an update soon.  Let’s just say, it’s going to be a big project and I’m hoping I haven’t bitten off more than I can chew.  *gulp*

7.  Finished two smocked dresses for Ellie:  a smocked bishop and a partial yoke dress, both inspired by AS&E projects.  I’m going to feature the red dress here soon because it’s really charming but I thought I would show you the bishop first, since there were definitely points I was tempted to bin it.

This bishop was a PITA.  I started it last summer, didn’t have time to finish it then, so I tucked it away once the smocking was complete.  The fabric, which is very well marinated stash, is a large scale fruit print in shades of dark olive, cranberry, cream and purple  (I think I bought it before I had kids and David’ll be nine later this year).

The inspiration was this dress, Bambino, from AS&E #35 (1996).  It was done, very dramatically on black, and the smocking features a really interesting cross-over pattern that was vaguely plaid like. 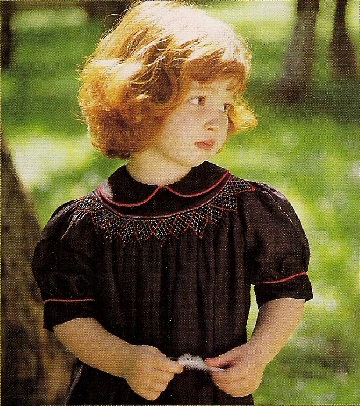 It looks a lot more complicated than it was and I smocked the majority of it from the sidelines while watching David’s soccer games.  The process went something like under cable, trellis, trellis, glance up, “Great work, team!  Keep your eye on the ball, Davey!”, over cable, trellis…. 🙂 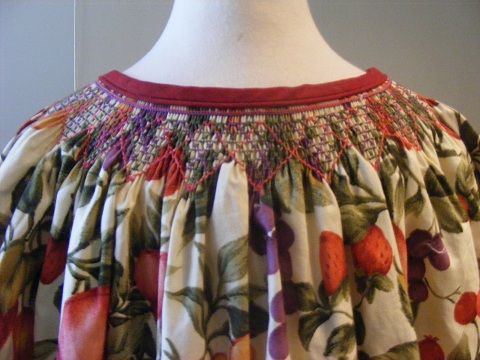 As you can see,the inspiration was a round yoke bishop, a style I really like.  And that’s what I’d planned to make this dress up as, until fate (or a wonky pattern) intervened.  If you remember, I made one for Ellie a couple of years ago and it was a big hit with both her and my SIL, getting tons of wear and tons of compliments.  At the time, I used the bishop pattern from “Beautiful Bishops” and I remarked then that there was something ‘off’ about the pattern, especially around the shoulders.

I stand by that assertion and raise you ‘one big headache’. 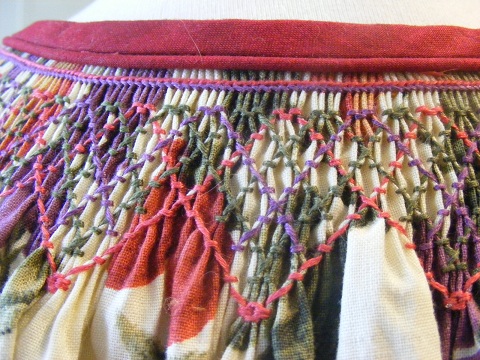 There’s something not right about this pattern.  Either it’s my pleater and the ratio it uses up while pleating or the yoke is too small or the cutting directions or wrong, or some combination of all three but when I finished the smocking, I could not make this bishop fit the yoke.  Didn’t matter how I blocked it.  Just no way, no how.  It would not fit.  I went back to the pattern, checked that I’d traced the right size yoke.  Yup, I’d traced the right size and the rectangles for the lower dress were right, too.  And given how big AS&E dresses usually run, when something won’t fit, you know it’s off.

Well, darn it.  (OK, I said something else, but this *is* a publically available blog, so I’m keeping it PG)

I slept on it and came up with a solution that saved this dress.

Here’s what I did.  In a nutshell, I recut the arm holes below the smocking to turn the dress into a traditional bishop.  If you look at a standard bishop and a round yoke bishop pattern, the only difference between them is that the arm scyes on the latter are shallower, because the bulk of the depth needed to go around the shoulders and neck are covered by the round yoke.  Otherwise, they’re both just rectangles with the J shape cut out for the underarm. 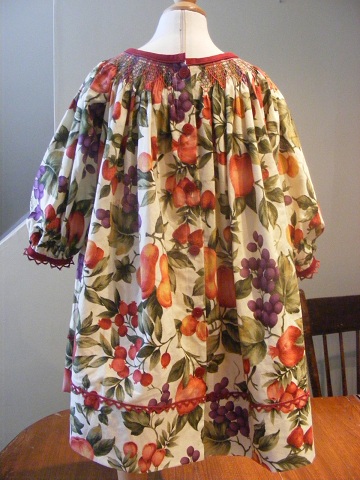 So I measured the difference between how deeply the round yoke armhole and the standard armhole came, marked and stitched deeper J’s, then cut the excess away, stopping just below the  smocking.  Then I rezig-zagged the seam and completed construction from there.  It worked really well.

Luckily, while the dress was too narrow through the shoulders, I had enough length to play with.  I simply removed the tuck and made the hem a little shallower and since I hadn’t cut the sleeves to length, I had enough length there, too and made super shallow bound cuffs.  Then I just fit it to Stanley’s neck, drawing up the holding thread and laying my tape on its edge to figure out how long the binding needed to be. 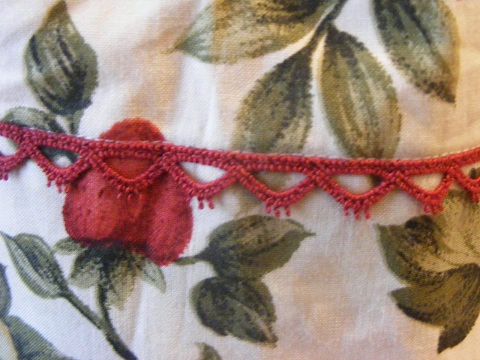 So it was saved, and on a galloping horse, it’ll be fine for school and the fall.  I added some cranberry trim that I’d picked up in France for a little more visual interest.  Low and behold, it matched perfectly, so at least something went together easily on this project.

But still, it was way more work than it should have been.  I’m definitely going to have to try the Children’s Corner round yoke next time I’m in the mood for one of these dresses.  Because there’s no way I’ll be using the Beautiful Bishop version again.