I didn’t buy the pre-cut shapes or the QOM option.   Firstly, I don’t like the idea of doing raw edge fusible applique on anything but a ‘daily use’ quilt.  I think it looks messy and not appropriate for an heirloom style quilt like this.  Secondly, it costs a fair penny to sign up for the blocks, especially when you add in shipping and then I’m limited as to the colours I’m working with.  So instead, I chose to make my own selections. 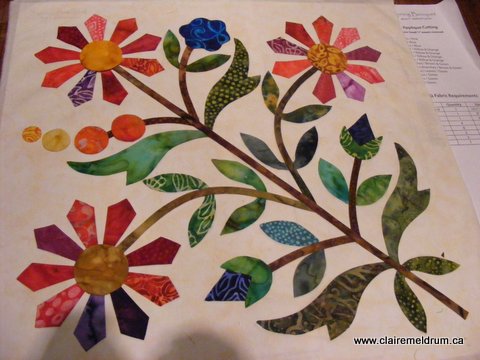 All of the batik fabrics are from Connecting Threads.

I’m always interested to know what people spend on their creativity.   So, in the spirit of disclosure, all of the fabrics, including the backing and background cost me $142.00, plus shipping and taxes.   Incidental supplies like my new mini Clover iron, basting glue and mylar circles were another $40 for a total of about $215.00.  Then I spent $6 on mylar for the applique shapes locally, plus $25 + shipping for the pattern itself.   That’s a total of about $270, which is very good for the degree of work and the size of the overall quilt, I think, working out to a around $7.50/square foot, with batting still to be purchased.

So, enough about the bottom line.  How’s the quilting going? 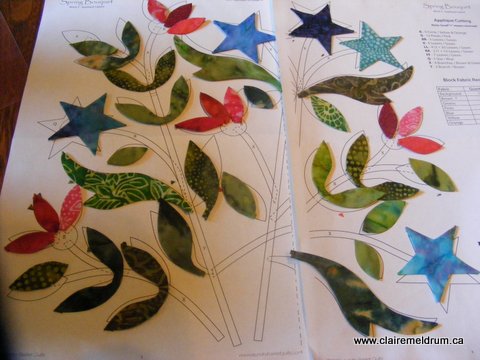 After five weeks, I’ve completed prep for four blocks at this point.  5 blocks and four borders to go.  Then everything has to be sewn down.  Originally, I intended to hand applique my pieces but I’ve given up on that plan and am going to machine applique them.  It would be lovely to sew them all down by hand but the hundreds of hours that that would require are not something I can justify, or frankly, enjoy.

Each square represents around 8-10 hours each.  That includes cutting the fabrics, starching and ironing the raw edges and then gluing it into place.   It’s going to be an incredibly labour intensive project.  Honestly, I really had no idea going in that there would be so much time involved – far more than the patchwork quilts I’ve sewn up to this point. 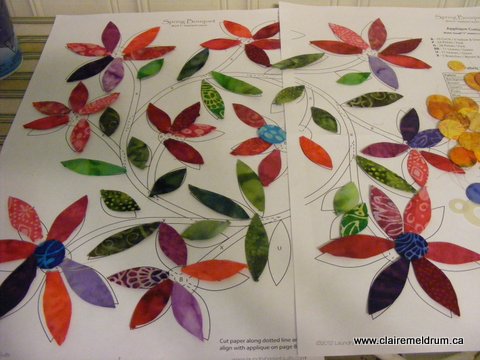 I’ve been using Erin Russek’s fabulous applique tutorial to prep my shapes and it makes for such lovely results.  If you’ve been using freezer paper up until now, try this technique instead.  I can’t recommend it highly enough. One trick I have come up with to keep my layouts straight has been to take a digital photo of all the pieces in situ, after I’ve finished prepping them at the ironing board.

Since each block has between 50-70 individual pieces, and each piece has to be fussy cut to showcase a particular colour, it’s no easy feat keeping 28 pink petals, a dozen purple ones and whole bunch of leaves and stems straight and looking nice without help! 🙂

Once I’ve taken a snapshot, I can take them off the layout guide, lay out the background and glue them back where I’d intended without worrying that I’m going to muck up the layouts.  If I’m unsure, I just turn on my camera and zoom in on the image.  It’s a big, big help.

Here’s what block nine looked like during layout.  Haven’t taken ‘finished’ shots of the other blocks yet so that’s why I haven’t post them. 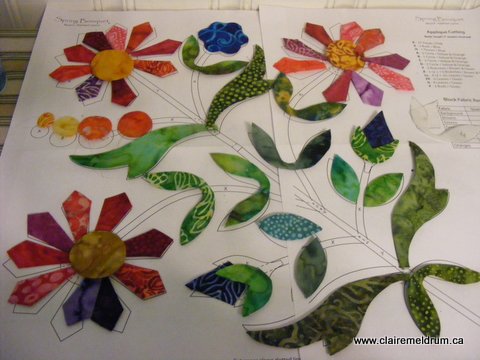 I’m just working away at it steadily.  When I need a break, I take a break and work on something else.  Recently, that’s been Hallowe’en costumes.  They’re looking pretty spectacular, if I do say so myself.  What have you been working on?  Something really detailed or fun and fast? 🙂