It probably comes as no surprise that I’m a bit of a vintage pattern enthusiast. So when I spied this pattern on Ebay last week – a McCall’s Smocktop pattern from the early 1930s – I knew I wanted it. A whopping $4 later, it was mine. Ah, the thrill of a bargain.

In addition to the absolutely adorable illustrations and like-new condition, I was immediately drawn to the unusual smocked sleeve treatment. It’s a very interesting variation on the traditional bishop that I’d never seen in any of my other period pattern books since it comes down over the sleeve. The short-sleeved version in particular is extraordinarily adorable, with a clever ruffle along the lower edge.

The pattern itself is actually a transfer. In the days before pleating machines, smocking was generally done in one of two ways: pleats were hand-gathered along a pre-marked or eyeballed path or they were smocked flat, where the pleats were formed during the smocking process by picking up dots that were ironed onto the fabric in a pre-designed pattern. It was cheap, quick and readily made up without any special tools or skills beyond an elementary knowledge of smocking stitches.

This pattern uses the latter method. The iron-on transfers appear to be unused. But rather than chance it with 80 year old transfers, I’ve decided to recreate the plate using my pleater. Interesting enterprise? Yup. Easy? Not so much. It’ll take some careful planning because the curved arm scye prevents anyone from simply rolling and pleating the straight neckline like a traditional, pre-seamed bishop.

Instead, I’m going to be using the seamless method of pleating a bishop, adding and removing needles as I pleat each piece and actually starting in the middle of the each sleeve piece, in order to compensate for the curvature. I’ll actually have to put the needles in and thread them after I’ve started rolling the sleeve pieces through.

And before you ask why, because I’m an over-achieving glutton for punishment, that’s why 🙂

But rather than focus on the challenges, check out the fabrics I’ve found: 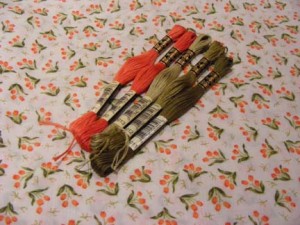 First up, an adorable cotton print with tiny coral tulips. Although I’d orginally thought I’d make this dress in a solid colour, these prints were just too cute to pass up. And at $2/m they were a great deal, too. It’s got a very retro feel, and paired with the coordinating DMC flosses, I think it’s going to be perfect for this design. It’s crisp, with a bit of body, but it’s not heavy or bulky like a quilting cotton.

But the day got better. Much, much better. Because while I’d fallen in love with little blue check version the moment I saw it, where in the world was I going to find just that plaid to make something like it?

Uh, try my local Fabricland. I was there this morning, picking out the tulip fabric, when I saw this absolutely, without a doubt perfect fabric. And 60% off to boot. Fate doesn’t need to hit me over the head for me to get the point. It followed me to the cutting table and just jumped into my basket. It’s a light, 100% cotton fabric, very soft and delicate. It should pleat up like a dream and while I’ll certainly have to make a petticoat for wear underneath, the opportunity to recreate that cute pattern illustration was just too perfect to pass up.

So tonight I’ll be cutting out two versions. And don’t worry; I’ll be taking pictures of my pleating process so you can see how I handle this unusual pleating challenge.