The Quick Quilt Project that Wasn’t

This is the “Power of Four” from the Fon’s and Porter’s May/June 2013 Love of Quilting.  The designer is Tony Jacobson. 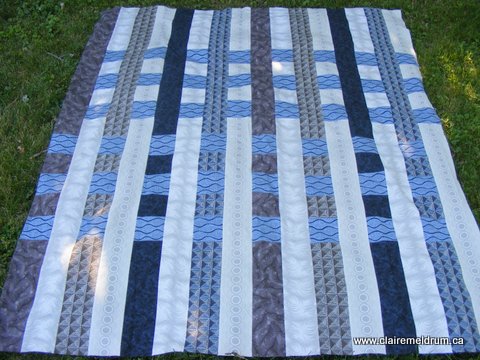 When I saw it in the magazine, I was immediately drawn to the muted palette and strong, modern lines.  It would make a perfect gift for my brother. No fuss, no muss.

Or so I thought…

The fabrics in the sample quilt all came from FreeSpirit’s Parson Gray (grey, people, it’s spelled g-r-e-y!).  That’s where the hassle began.  Because no one online store had all of the fabrics used in the quilt and no one local carried them either.  Somebody had the Anasi in the blue colourway, but not the Wind print.  Somebody else had Clouds but not the others.  It would have meant ordering from three different shops and paying a fortune for shipping.  So I compromised and ordered as much as I could from Hawthorne Threads, figuring that I could find a brown and dark navy print myself. 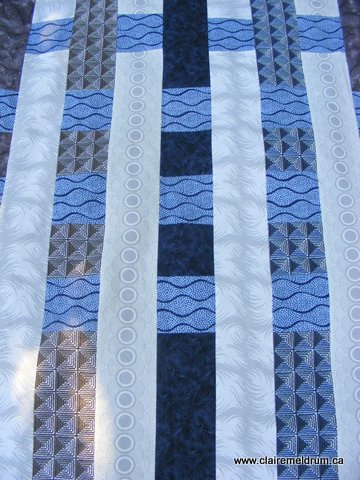 (BTW The pictures aren’t fabulous, since I took them outside.  Shadows and light and dappled trees are great for picnics, but not quilting pictures. Unfortunately, we’re in the midst of renos right now (for those folks who know us, they know we’re always reno-ing something :)) but since this is a pretty major project that involves much of our second floor, our whole house is boxes and tools and a drywall lift in the dining room, which means there is absolutely no space to lay out a quilt top for good photos.   It’s outside or nothing for the next little while.) 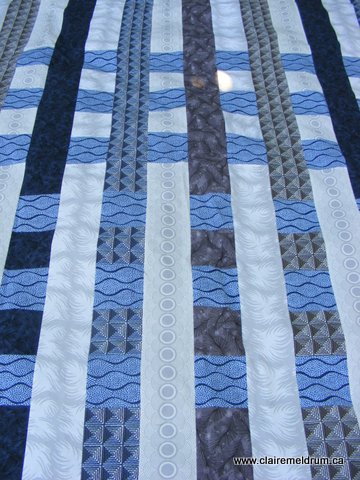 I hunted around and between Joann’s and a couple of local shops, found what I needed.

Then I started cutting and that’s when my headaches really began because I quickly realized that if I wanted my large patterns to match, as the designer recommends, I would have needed to order  lot more of the Parson Gray fabrics than Jacobson lists in the materials.  The repeats are big and trying to match the prints eats fabric.  The yardage amounts were fine for the all over prints (the feather sand the dark blue mottle) that I chose myself but the Parson Gray numbers were way off.   If you’re making this quilt, I recommend at least 1/4-3/8″ yard more of each of the Parson Gray fabrics.  For the dark blue wave that’s used to create the woven pattern, get half a yard more, if you’re planning on using it for the binding, too.  Otherwise you will run short. 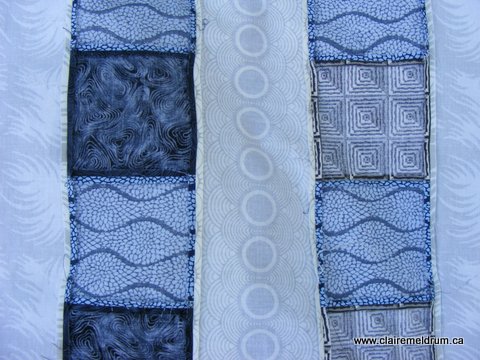 I ended up having to order half a yard more of Clouds (the big circle print) from Warp and Weft, just to finish the darn top.  By this point I was pretty cross and when it turned out that I managed to misplace one of the medium Anasia print rectangles, and didn’t have any more that I could cut it from, I wanted to bin the sucker.  Everything seemed to be going wrong.  How could I sail through something as complicated as Spring Bouquet and be in such a bother about a bunch of ruddy squares?

However, I gave myself the evening off and finally came up with a solution for that missing block.  Can you see what I did to fix the problem? 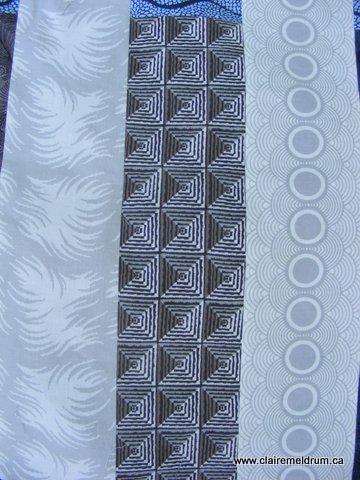 I pieced it.  See, what I ended up doing was cannibalizing the backing, which was made of the same colourway and print and trimming off a narrow strip.  I couldn’t just cut off 4 1/2″ inches otherwise it would have been too tight for Allison to mount on her long arm machine. So I cut a narrow strip, matched the pattern and sewed it together before cutting a new rectangle.  Takes fussy cutting to a new level but I was able to spare myself the expense of another mail order and nobody will ever notice once everything’s quilted.  Hopefully. 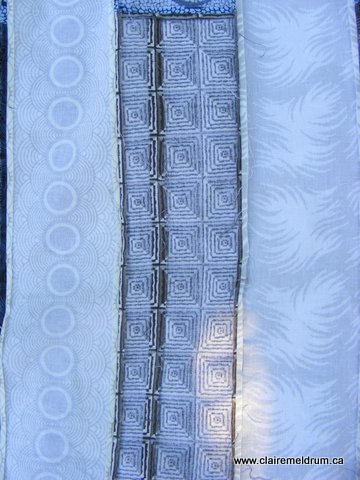 In the end, I spent about a week running around for fabrics and about six hours actually sewing.  That’s not a great ratio.  But it is done and I will be dropping it off at Allison’s this week.  Sometimes, that’s enough.