Here’s the first one, which is a square yoke design from AS&E #30, published in 1994.   It’s one I’ve had my eye on for a while and when I found a deep brown and scarlet all over paisley during a recent visit to Len’s Mill (the same trip I found the cat fabric, actually) I immediately thought of this design.  The sample garment used a fabric with very similar shades, although it did have a touch more olive in it. 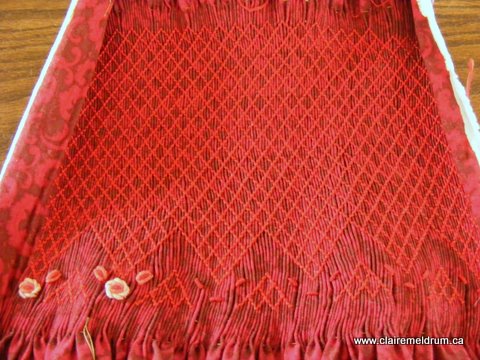 I’ll be using a different pattern, since the magazine patterns run sizes 6 thru 8.    I still have to pleat the long sleeves, which are also smocked.  Here’s how the inspiration looks: 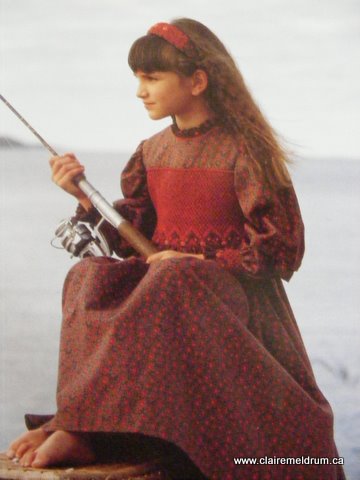 I don’t actually expect Ellie to wear this dress until next fall, so I’ll make it in a size 4 but the single colour trellis is perfect for the mindless smocking I get to do poolside.   I don’t have to keep track of a pattern or colour shifts.   It’s just a matter of smocking until my dripping mermen reappear.

Then I’m taking a different tack with this spring sundress.  It too is an AS&E design, called “Little Sweathearts”.    Issue #38.  I liked the unusual revers on the dress front – it’s not fussy and can worn year round with the addition of tights and a long sleeved shirt. 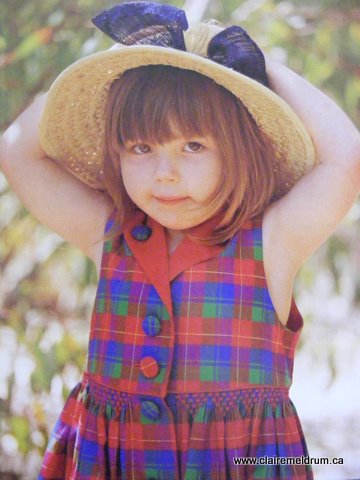 The fabric is some that I purchased in Paris last summer at a ‘coupon’ or discount outlet.  It’s scrumptious printed batiste, 54″ wide.   The entire waist is pleated in half-space rows and then smocked in six-stitch flowerettes.  I toyed with bulking up the pleats with interfacing but instead, I simply cut the panels wider than the recommended width  and starched the upper edge stiffly to compensate for the light weight fabric. 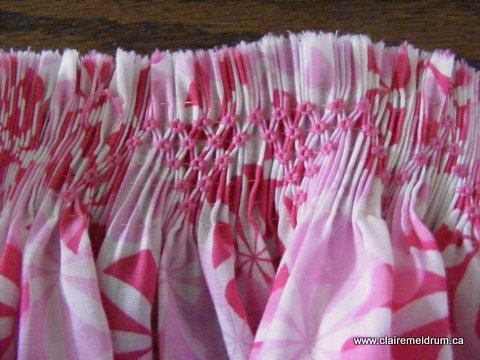 I had a heck of a time finding the right shade of pink.  I simply couldn’t find one with the right deep raspberry shade in either DMC or Anchor.  I ended up compromising and using some “Rose” brand floss instead that I picked up 5 for a dollar.  It bled like you wouldn’t believe but after rinsing and soaking it five times, I’m confident the colour isn’t going anywhere now.

These two projects should keep me occupied until the end of the session, don’t you think?