A Quilt of Valour Donation

What do you do when you finish a UFO and it just doesn’t speak to you? 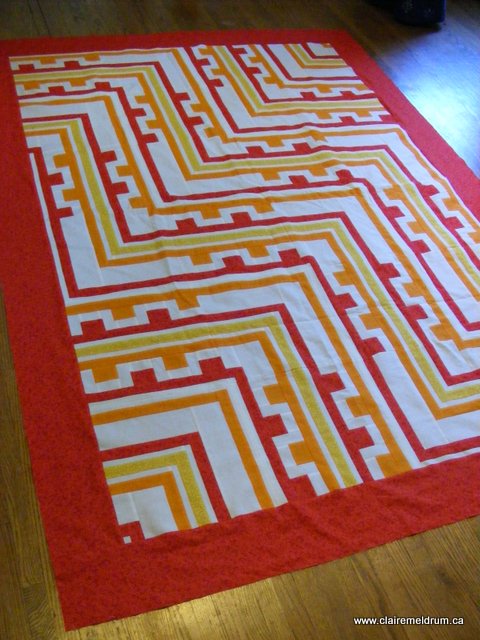 That was the dilemma I was facing with this quilt, which I’d started with the intention of it being for Andrew.

His room is done in a deep red, with a black and orange flame border à la Hot Wheels.   He’d been making do with a boring, grey duvet since I’d painted his room so when I found a black flame fabric that was a dead ringer for his border at Joann’s in 2012, I decided it was time to make him a quilt, too. 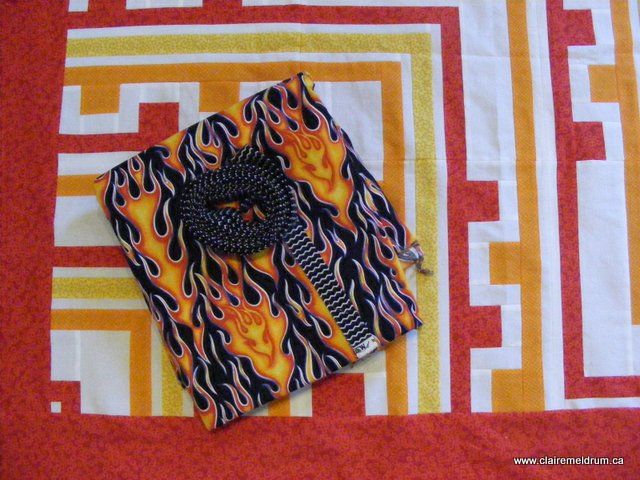 I started keeping an eye out for a good boy pattern and I thought I’d found it with a pattern called “Shifting Gears“.  Featured in the Spring 2012 issue of Quilts from Quiltmaker’s 100 Blocks magazine, the design was bright and modern and would give me lots of room to bring in the reds, oranges and yellows that Andrew so loves.

Things went along swimmingly.  I got all the pieces cut out and then, as life has a tendency of doing, I got busy with other things and the blocks got shuffled off to the side, unassembled.  So this summer, as part of my (never-ending) UFO kick, I buckled down and got it put together.

I should have been ecstatic.  One more UFO crossed off the list.

No matter what way I turned it, or draped it, I just didn’t *like* the finished product. 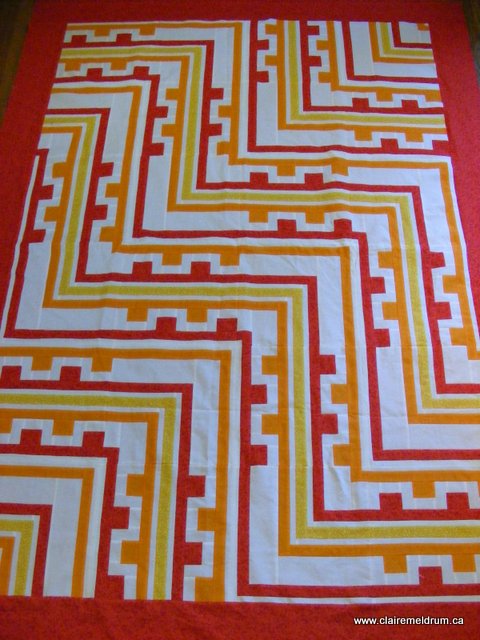 Individually, the colours are good.  But all together, the white backdrop is too different from the black flames and the reds and oranges are too bright to meld well with the deep red paint in Andrew’s room.   But before I decided irrevocably, I laid it out across Andrew’s bed and asked him what he thought.   Andrew looked at it long and hard and shrugged.  “It’s OK, Mom, but I think I like the duvet better.”  Seeing the look on my face and misinterpreting it as being brought about by his lack of enthusiasm, he hastened to reassure me.  “I mean, it’s not bad.  And you sewed the pieces together pretty straight.” 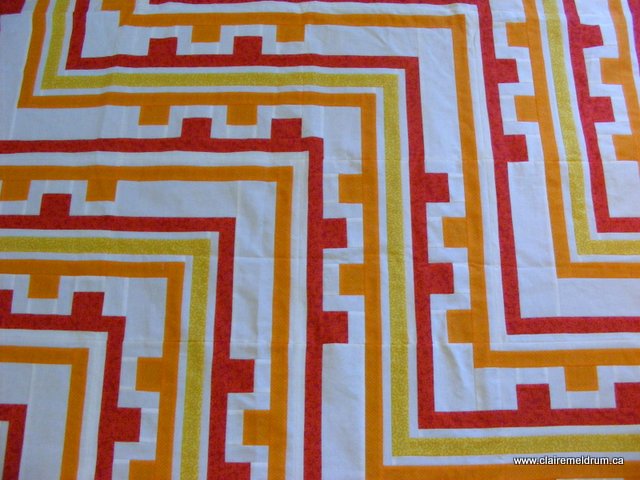 That was the final nail (or pin!) in the quilt top.  Now that I knew Andrew wasn’t going to be heartbroken if this long-promised UFO never made it to his bed, what was I going to do with it?  It wasn’t a binner – I had too much time invested and the quality of the materials were good.  Happily, a solution was close at hand.

Alison, my long-arm quilter, is among the other twenty-seven hats she wears, the coordinator for the local arm of the Quilts of Valour program.  It’s an charity initiative that gives quilts to members of the Canadian Forces, past and present, and their families, during times of need – often during medical treatment or illness.  Making a quilt top to donate had long been on my list of oughta-dos, but there were never enough hours in the day.  Now I had a great ‘guy’ quilt all ready to go.   I bundled everything up – pieced top, backing and binding – and dropped it off at Alison’s last week.

She’ll be taking it from there.  She’ll quilt the piece and finish it.  Then it will be collected and distributed to a serviceperson.  I hope they enjoy it and that it gets lots of use.   It makes me feel like I’ve contributed to something worthwhile, even if Andrew still has to make due with his boring duvet for a little bit longer.