Sometimes, we do crazy things for the people we love.

Case in point, when the boys and I were up visiting my brother and sister in law a couple of weeks ago, and the movie “Frozen” came up (probably because Andrew was singing Let it Go For the ten millionth time and I was considering letting him go — onto an ice flow!), Ellie made a request. “Aunt Claire, could you make me a dress like Elsa’s?”. Inside, I was screaming “Gack! Sequins! Slinky knits! Sparkles! Synthetics!”. The trifecta of horrible fabrics, in other words. Outside, I said, “Sure, sweetheart. I’ll do my best.” 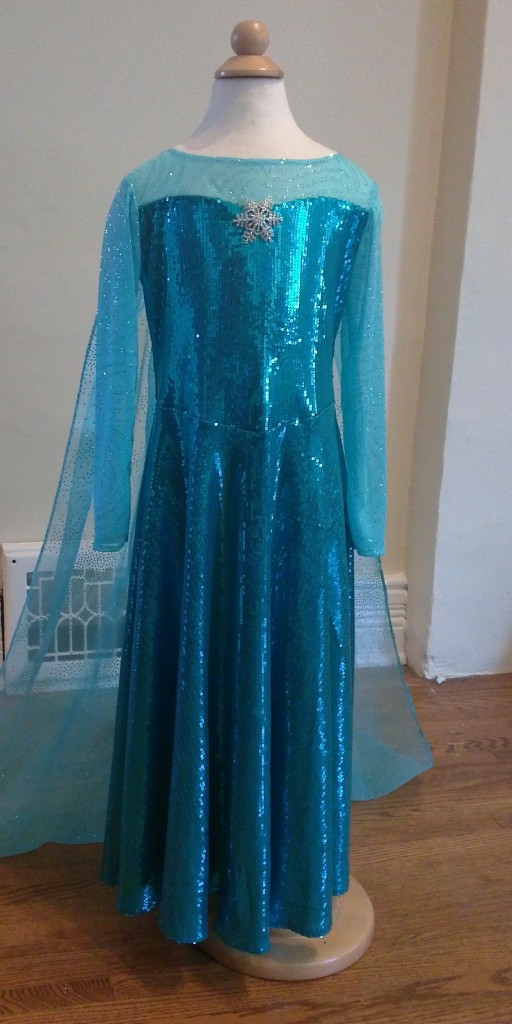 Oh, the effectiveness of big, blue eyes. In ten years time, there won’t be a teenage boy left standing for three counties. 🙂

Happily, I’m glad to report that sewing this dress wasn’t nearly as dreadful as my imagination made out. 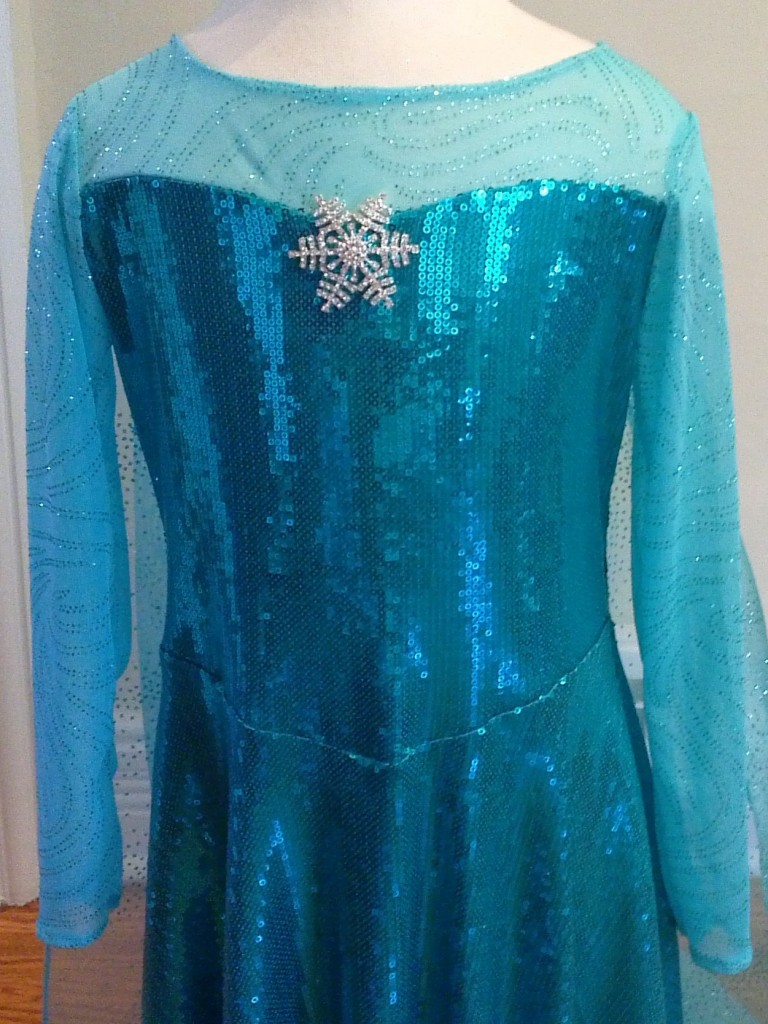 The blue sequin fabric is a turquoise knit that I found at Ann’s. They told me they sell at least five dresses worth of this fabric everyday and have reordered it at least twice since January. I got 1.75m, because I wasn’t sure how much I would need, or even what pattern I’d be using, but after cutting the pattern out, I realize that 1.4m would have been plenty (and if you were making a smaller size, and were careful with your layout, you could probably get away with even less).  Unfortunately, they didn’t have any sheer knits in the right shade of blue for the sleeves or neckline.   But a quick trip across the border to Joann’s solved that problem admirably and I was able to get both the sheer knit and the sparkly synthetic organza that I needed for the cape, plus the zipper, for under $10US. 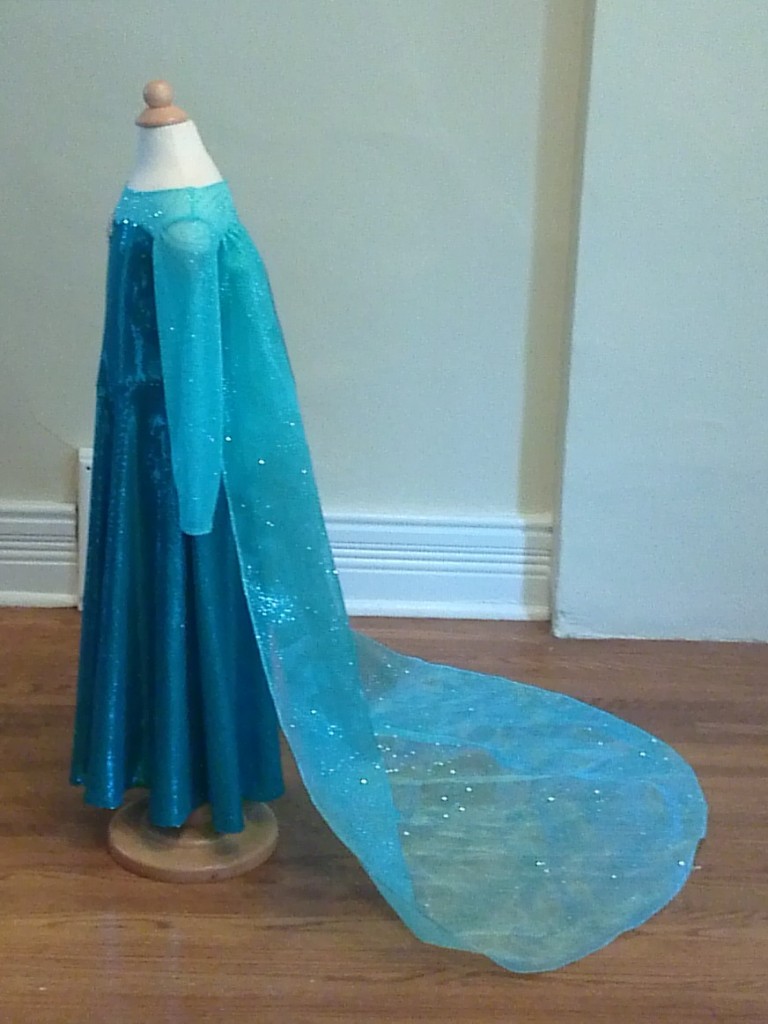 The next question was what I was going to use for my pattern.  A google search turned up a lot of no-sew or low-sew options but very few suggestions for actual patterns that would work well with the sequined fabrics or had big, poofy gathered skirts, when Elsa’s silhouette was much more streamlined.  When I make a costume, I want it to be durable and comfortable, but I also want it to look convincing.

Lo and behold, I had the answer in my stash.  Simplicity 5827 might not look princess worthy at first glance but as soon as I saw it, I knew it was perfect. It’s a simple, long sleeved dress with a smooth, circle skirt that zipped closed in the back.   That sounds like Elsa’s dress to me, which meant alterations would be minimal. 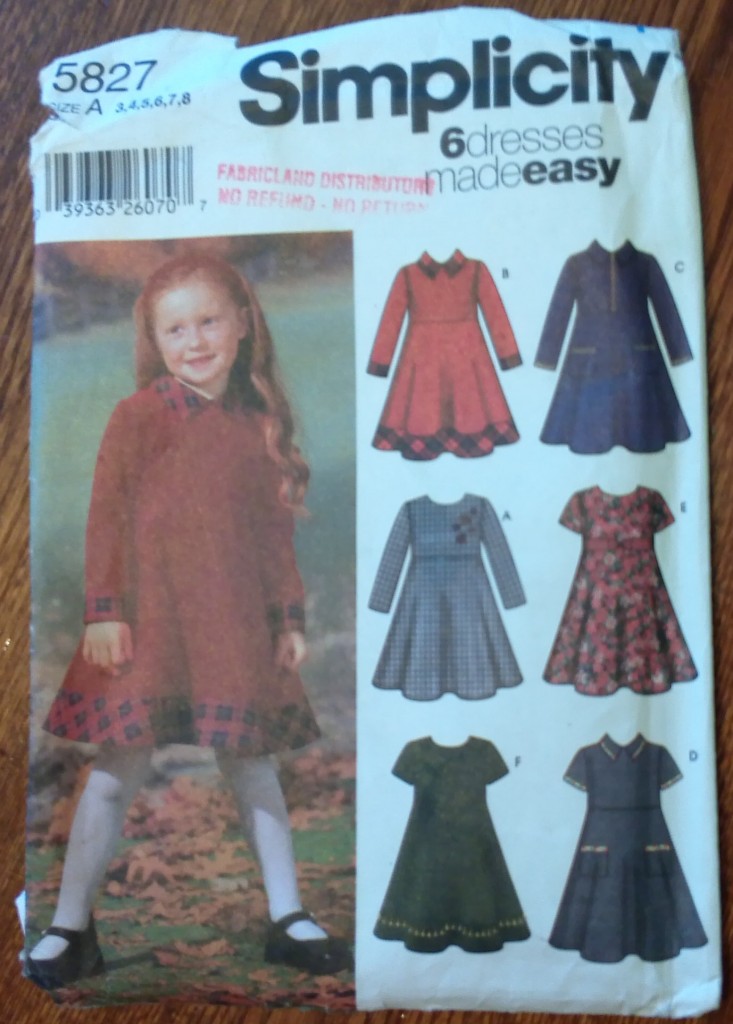 Of course, ease was going to be an issue, since the Big 4 always run big.  Add in the fact that the pattern was designed for wovens and I was using a knit,  I knew that the pattern would be much too big if I sewed it as is.  But it was an easy fix – all I did was cut off the 5/8″ seam allowances and used 1/4″ allowances instead.  That created the close fit I was looking for without requiring any redrafting on my part.

I made four other changes to the pattern before I cut it out: 1. adding to the skirt length (from knee length to ankle) 2. lowering the waist 2″ and creating the slight basque shape 3. redrawing the neckline into the shallow scoop shape and 4. dividing the bodice front and back into an upper yoke and a lower bodice.

Then it was time to cut out.   The sequins were slippery and did a number on my sheers.  I knew they would and used a pair that needed to be sharpened anyways.  Just a warning, if you’re cutting these, don’t use your best pair.  They’ll be ruined in no time flat.   The sleeves and the upper yoke were a piece of cake by comparison.  I just had to be careful pinning them, because the sheer knit did have a tendency to run. 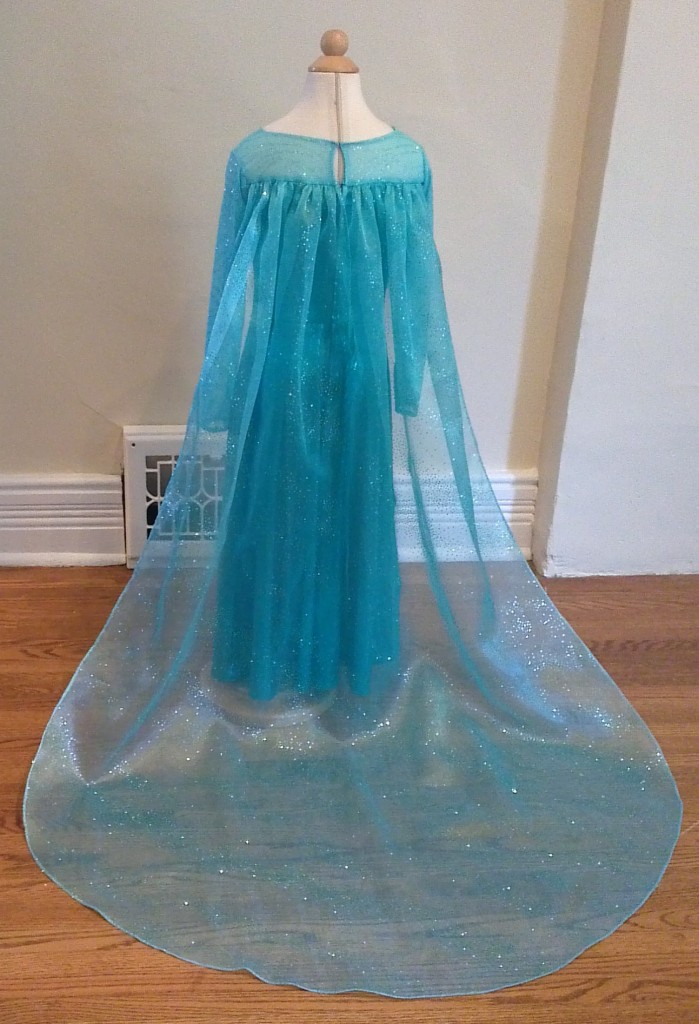 The cape was simultaneously the easiest part and the trickiest part.  No pattern.  Just 1 yard of 54″ wide synthetic organza.  I cut it across the grain, because I wanted the long train effect.  I eyeballed the curved lower edge and cut it out without even marking it.  It’s a costume – who’s going to check?? 🙂  The problems arose with the pressing.  This stuff melted if you looked at it funny, which meant pressing in the narrow rolled hem was out of the question.   And it refused to play nicely with my rolled hem foot.   I ended up foregoing the pressing between stages and did the narrow hem by hand.  It looks good enough.  Again, it’s a costume.  Who’s going to check?? 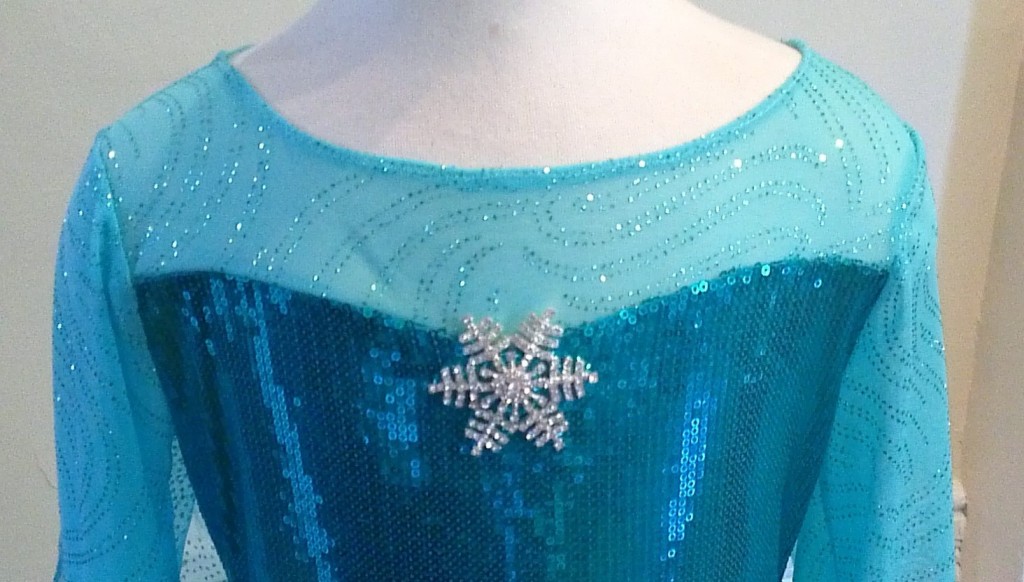 The last piece of the puzzle was adding the cape to the dress.  If I added the cape straight across, then it wouldn’t be possible to unzip the dress.  I saw some clever ideas using velcro to attach the cape to the dress but that would necessitate dying the velcro (not in this lifetime!) or snaps, but I didn’t think that would hold up long term.  My solution was to insert a really narrow placket, about 10″ long, at the CB, into the cape itself.  It lets you access the zipper and makes it possible to get into and out of the dress easily.  I was afraid it would distracting but the fullness of the gathers hides it admirably.  I finished the upper yoke with a tiny hook and eye, which was the only hand sewing, besides attaching the snowflake brooch, I did on the entire project. 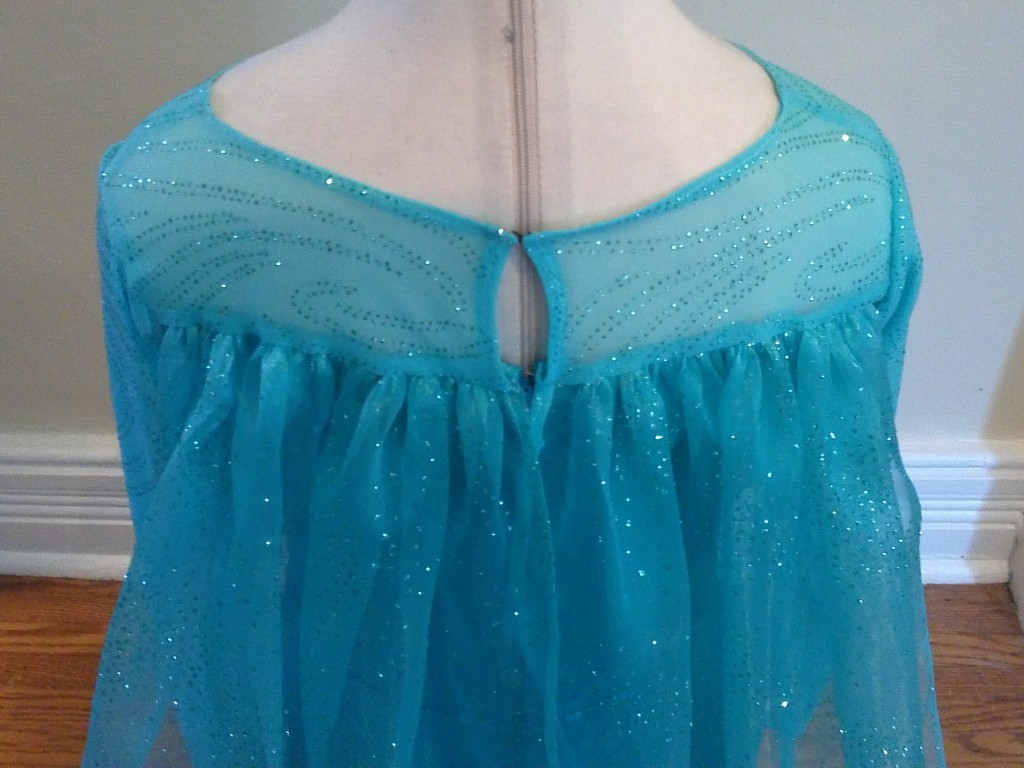 Everything else was done on the machine.  I don’t have a serger, so I sewed it all on a conventional machine.  I used a narrow zigzag stitch (W1.0, L. 1.6) for the seams, so the stitches wouldn’t pop and then overcast the raw edges with a stretch overcast stitch.   Nothing is lined.  A narrow strip of lightweight interfacing supports the zipper.  The only other notion that I used was clear elastic, which I stitched on top of the horizontal seams on the shoulder and along the shaped bodice where the sheer knit and the sequined fabric met.  It keeps the knits from stretching out of shape.

All told, this project took about 1o hours to make, from altering the pattern to cut out to actual sewing.   I will send it up to Ellie this week by mail.  I can’t wait to see what she thinks!