Another Peep at Bo Peep

When we last left our animal-herding friend two years ago, she was in the early stages. 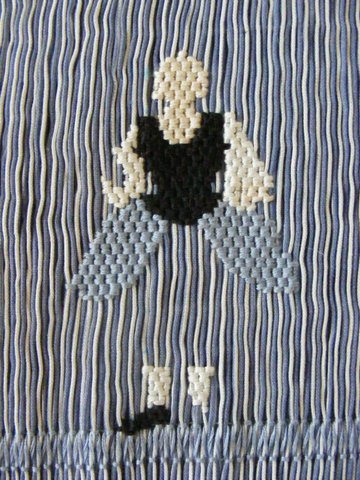 Now all of the picture smocking is complete and I think it looks good, although there are a few things I will be tweaking when I smock it again. 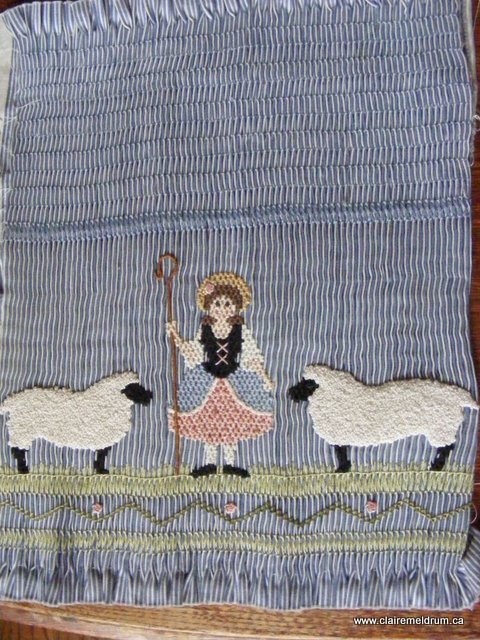 Why, you ask, am I smocking it twice?  Because this project is intended to fulfill some of the requirements for my SAGA Artisan submission and not all of the things I experimented with in this version worked out exactly as I’d intended.  That’s OK – it’s a creative process and changes are to be expected.

One of the things that will be different second time around are the sheep.  Turns out that in order to fulfill the artisan guidelines, they have to be identical, not mirror images.  So next time, they’ll be facing forwards.

After I finished picture smocking, I hmm’d and haw’d about whether or not to add the french knots. 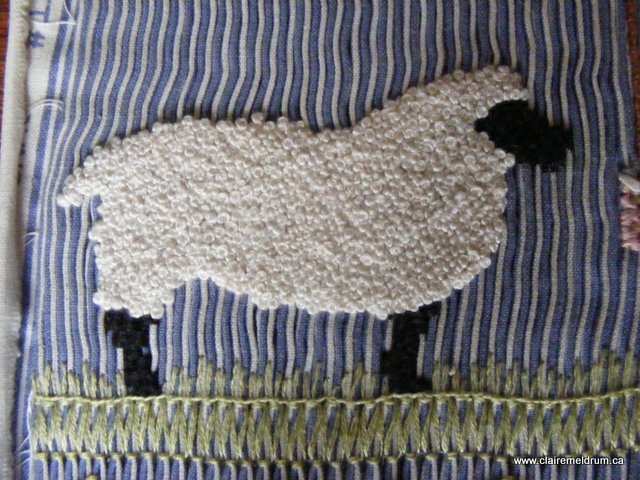 As you can see, I went for it.  It just looks more ‘sheepy’ to have the knotted surface.  That said, due to the density of the embroidery, plus the weight of the thread, there is zero stretch to the sheep.  So if you’re thinking of doing a similar technique, make sure your insert is blocked to its finished size,  because one you’ve committed, there’s no stretching things out afterwards.  I won’t be working the French knots on my final submission because the adjudicators need to see my stacked cables.    Frankly, that’s not a bad thing – I was making knots in my sleep!

The sampler is 31 rows.  I hand-gathered it, to keep the stripes perfectly even.  I don’t know if I’ll be able to find this exact fabric again but I’m going to try!  If not, I’ll likely go with a solid blue instead.

Here’s the back, in case anyone is interested.  You can see from the undulation in the backsmocking that this hasn’t been blocked yet.  If I was submitting it, I would be doing that to square everything up but since this is just a working piece, I’m not going to bother. 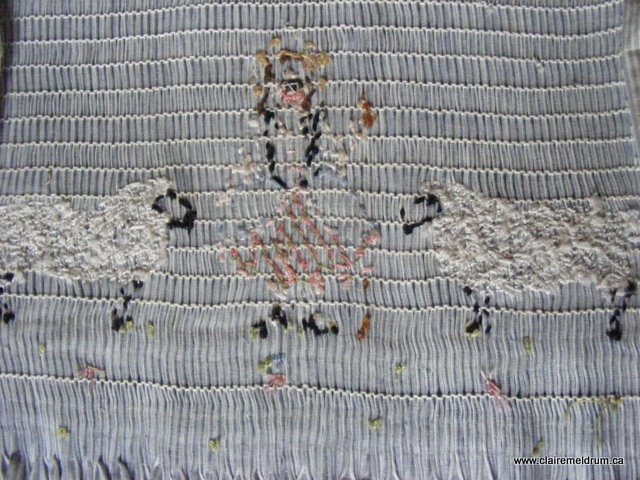 The rows of grass & sky are a mixture of closed herringbone, surface honeycomb and Van Dyke, with feather stitched grass and a feather stitched zig-zag.  Obviously, my feather-stitching isn’t centred.  At this point, I’d been lugging this UFO around for the good part of two years.  I tested about four or five different fillings and ripped them all out.  This simple feather-stitch done in variegated floss was my final choice.  Once I knew it would work, that was enough for me.  D-O-N-E!! 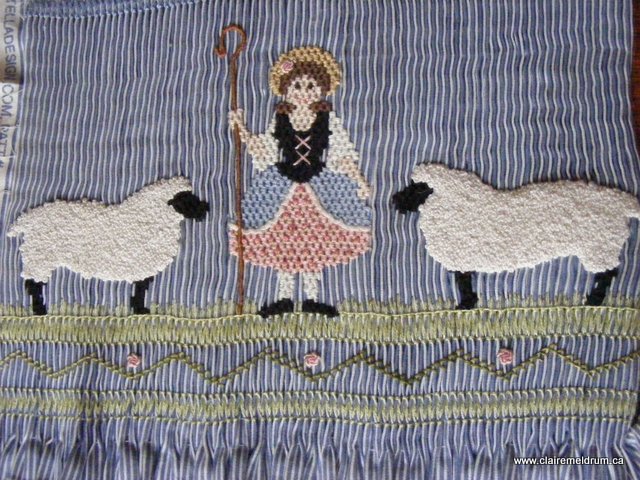 I’ve also worked five rows of honeycomb at the top of the design.  BTW, when honeycomb is worked on pre-pleated fabric, it is the slowest smocking stitch known to man.  Seriously, I’ve had appointments at the passport office that moved more quickly than these rows, which seemed to progress at glacial speed.  I’d stitch along for an hour and find myself saying things like “Yes, only 4/5th of the row to go!”

I have to show about a dozen different smocking and embroidery stitches between all my elements (two smocked dresses and this sampler).  I joke that it’s a bit like playing tetris, and getting all the stitches to fit.   I have both my dresses done.  Once my points are verified, I’ll be able to pleat my samplers, restitch Bo-Peep and get everything off to the adjudicators.  I’m aiming for May.  I’ll let you know if I make that deadline or not!