A Summer Dress with a Cherry on Top

Posted by Claire on Jun 26 2013, in Pattern review, Sewing for Children

I’ve finished another summer dress.  Two down and one to go. 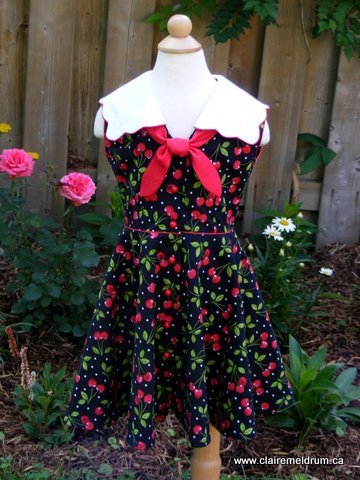 Unlike the light pastels of the Farmhouse dress, this dress features a dramatic cherry print on a black and white polka dot background. 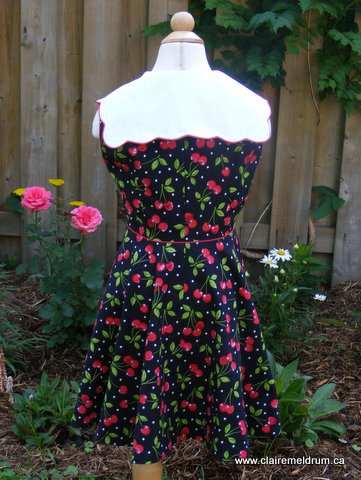 I’ve been seeing cherries a lot lately and when I found this fabric on sale at Joann’s this spring, I thought it would be ideal for this project – a vintage styled dress from a vintage pattern. 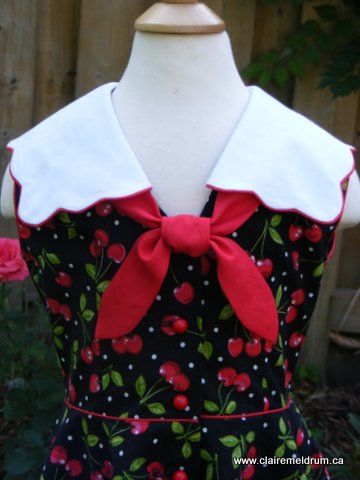 I don’t sew a lot of vintage patterns but pattern drafting enthusiast that I am, I do collect them.  I like to dissect the layouts and I often incorporate ideas I find there into projects I use for my magazine work (the DIY bishop that was featured in Sew Beautiful last summer started its life when I saw an illustration of a honeycomb smocked bishop in a 1940s magazine and started to wonder if I could do something similar). 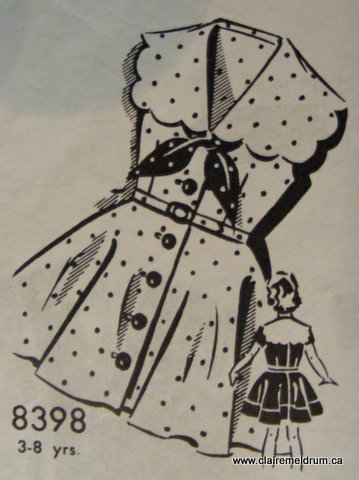 I used the pattern, Patt-O-Rama 8398, as is.  There was no date on the pattern, but I’d guess it’s mid-1950s.  The perforated pattern had never been sewn, so despite the fact that it was 60 odd years old, the pieces were pristine.  I traced them off and only made two minor changes:  I lowered the waistline 3/4″ (my niece is tall and slim) and I added 3 1/2″ to the overall skirt length. 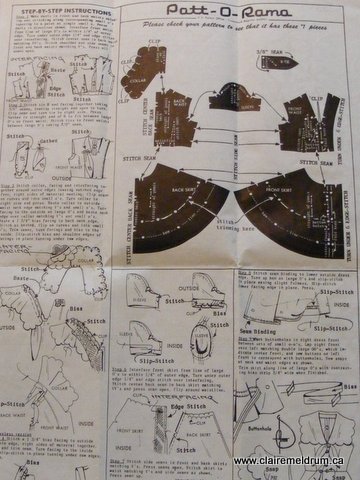 The dress went together very quickly, because it only had six pieces. 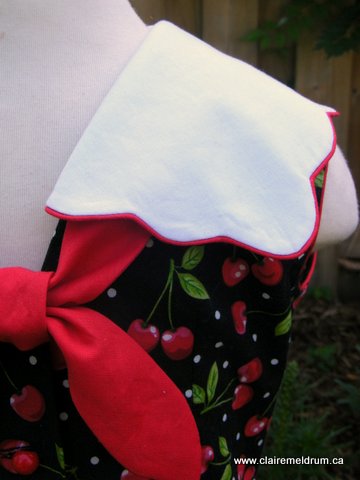 The collar was the most involved aspect.  I traced the scallops using my marking wheel onto a block of white fabric and then basted the piping in place before stitching it down with my pintuck foot.  Then I cut it out and turned and pressed it.  Fiddly but not difficult. Edited: See the Scalloped Collar Tutorial here for complete step-by-step directions. 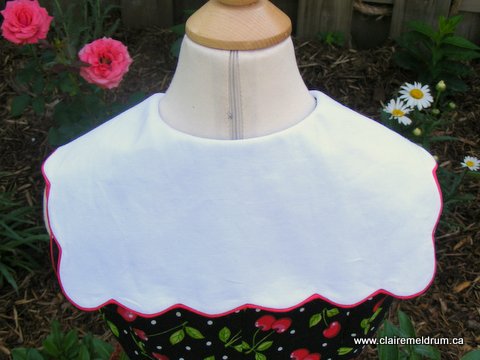 I’d thought about doing a corded edge instead but after trying out some samples, I thought the piping would hold up better to wear and tear. 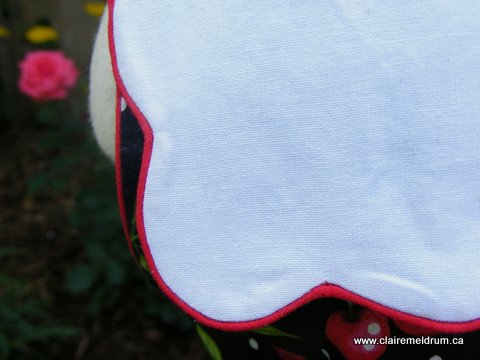 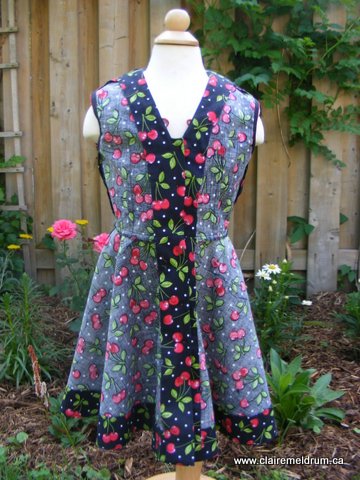 I could have overcast the raw edges or done french seams.  But in the end, because the bodice wasn’t lined, I went with something from the period  and clean finished most of the seams.    It was very straight forward and gave a really flat, inconspicuous finish.  I think people should clean finish their seams more often.  Maybe I’ll start a club – Sewers for Clean Finishes!  Who’s with me? 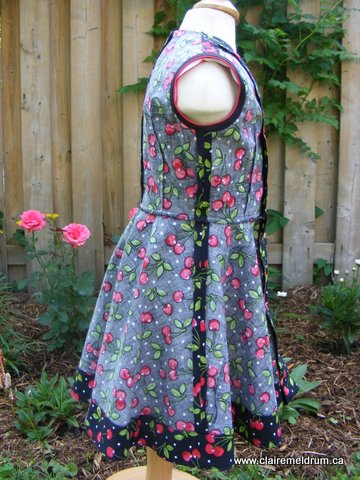 Only the armscyes were treated differently.  Those, I piped and then finished with narrow doubled bias.  No bulk, no fuss. 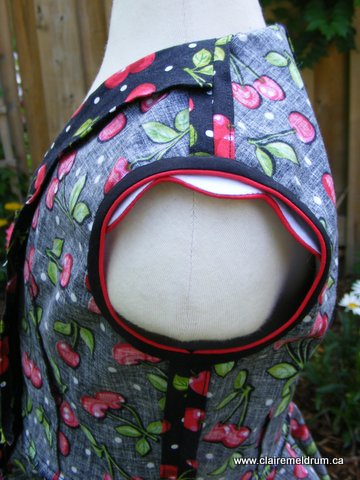 For the hem, I had to deal with the curved circumference of the quarter panels of the circle skirt.  That meant folding up the hem was out.  Instead, I cut 2 1/2″ bias strips and sewed them in place. Then I understitched and hemstitched the upper edge. 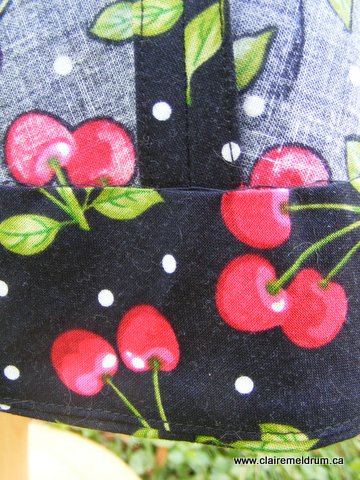 I did experiment with adding crinoline to the hem but it looked too costumey to my eye and I ultimately went without.  I wanted my niece to be comfortable wearing this dress and I didn’t think the extra stiffness would be something she’d like.  For the same reason, I nixed adding a slip or netting.

Want to know my favourite part of this dress though?  It’s not the collar, although I’m really pleased with how it turned out.  It’s not the red neck tie, although that’s cute, too. 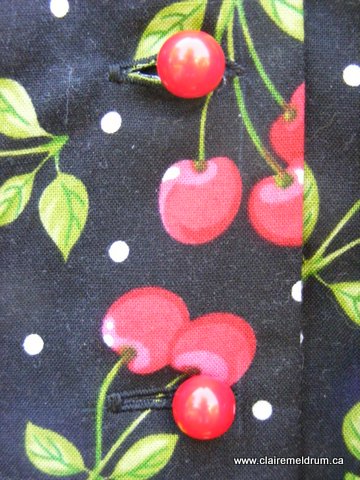 Perfectly round and cherry-like, they’re the finishing touch on this dress.  So you’d think I’d had to search high and low, right?  Scour the internet?  Spend through the nose?  Nope, because even though they’re vintage buttons, fresh off the card, I found the buttons after I’d bought the fabric and I didn’t have to spend a penny on them.

A lady who knows an elderly lady who knows my mother also sews happened to mention in passing that she had some old buttons put aside and would my mom be interested in them?  My mom said, “Of course,” thinking there’d be a small tin’s worth of buttons and she could use them on her charity sewing projects. 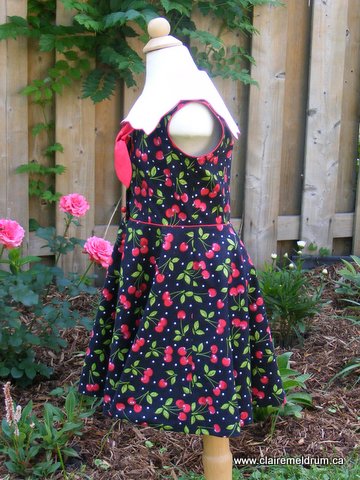 Three solidly packed grocery bags of buttons later, my mother and I have buttons and buckles in every shade, size and style imaginable.   I’d guess there were upwards of twenty five pounds, maybe more.  Let’s just say I’m not short on buttons for the foreseeable future!