Posted by Claire on Feb 20 2013, in Sewing for Children, Smocking

I’ve been working on this dress on and off since the summer.  If you’re wondering why it took so long, it’s a ‘swimming’ project.  What’s a swimming project, you ask?  Well, it’s closely related to the ‘soccer’ project; swimming projects live in an easy-to-carry bag during the week and the only time they come out are while I’m sitting on the sidelines while Thing 1 and Thing 2 are swimming/gymnasticing/music lessoning etc.  The projects are always easy to do without a pattern and simple.  This all over, one colour trellis definitely fit the bill. 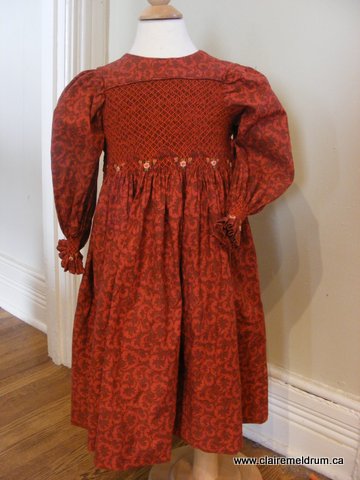 Since I always intended it as a winter dress, it’s a long-sleeved partial yoke dress.  The cuffs and bodice are smocked and it’s a size 4. 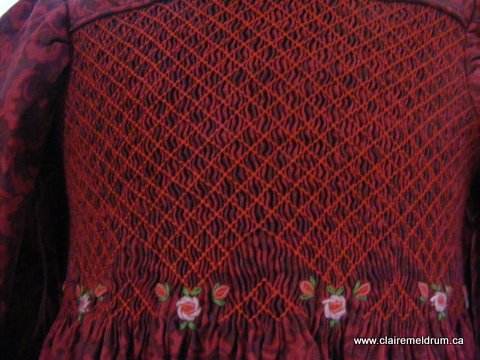 The plate and inspiration are from AS&E.  I’d show you the original but right now, I’m *still* renovating my sewing room and all my magazines are packed away.    It’s from a fairly early number, though.  34 or 35.  Mid-90s, at any rate. 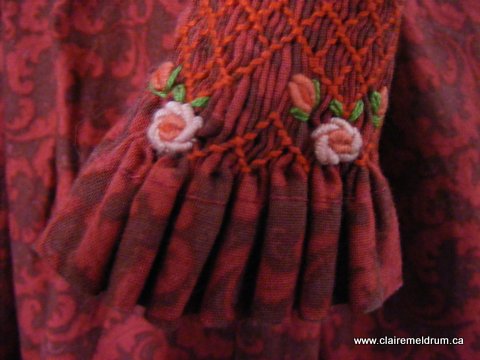 I had a few issues with the fabric – there were misprints, where the ink didn’t take.  After washing, they left small white spots.  I was able to cut around most of them but it wasn’t a very efficient use of fabric.  It’s a good thing I got as much yardage as I did. 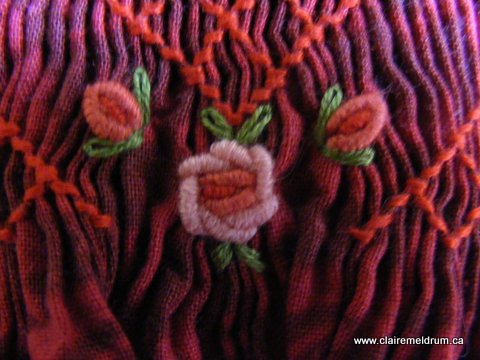 Overall, though, I like the dress.  The colours make me think of a cardinal, with the reds and browns.  I didn’t have enough fabric to do a sash like I had planned, so I improvised with a button band instead.  It worked nicely, although I was squeezing out every last drop of fabric I had to make the piping.

I also piped the neckline and while it’s not a common look, I like that, too.  It’s very clean and it gives a really nice, well defined look.  I used piping instead of the neck ruffle that the original garment featured.  It was a dated design feature and on a tiny neck, it would have been way, way too much.

The smocking is simply red trellis diamonds, worked to points and accented with red and peach roses and detached chain leaves.  Very simple but the roses add a touch of lightness, I think.