Posted by Claire on Apr 02 2012, in Embroidery, Sewing for Children, WIP

I don’t do a lot of ‘straight’ hand embroidery.

If I do embroider, it’s often in conjunction with my smocked projects – bullions, feather stitch, that sort of thing.  But last winter, I fell in love with the most gorgeous embroidered jacket from a back issue of Inspirations #12 (1996) called ‘Enigma’.    The knit jacket features the most glorious band of embroidered flowers round its hem and I knew I had to make it.  Isn’t the cover delightful? 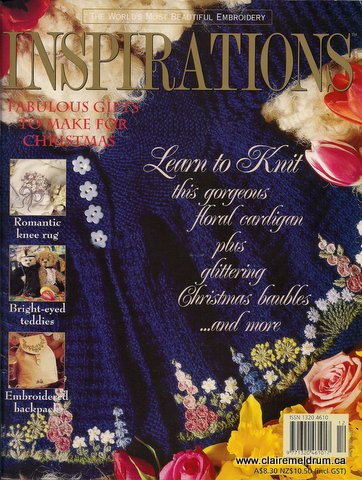 Only one problem.  I can knit.  I’m not bad.  My tension is good and I can follow fairly sophisticated patterns.  But I don’t *like* to knit and I’m slow.  So the idea of first knitting the jacket (and sizing it up, to boot, since the pattern in the magazine was for a 6mth old) and then embroidering it didn’t appeal.

But when I found a deep navy wool coating on a trip to Lens Mill recently, I knew exactly what I was going to do with it. 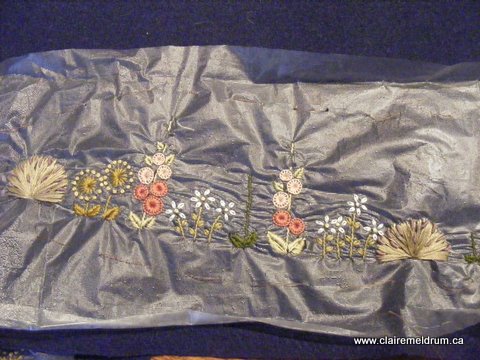 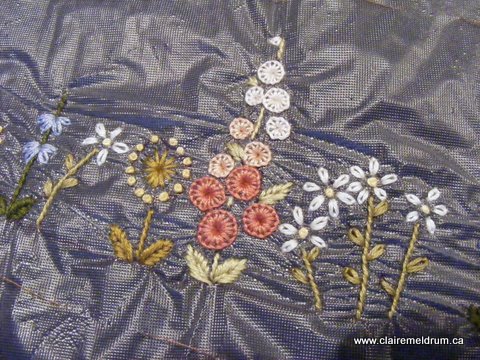 To start, I found a pattern with similar details as the knit sample – round yoke, full hem, straight sleeves.  I’m making a swing coat from the Fall, 2008 issue of Ottobre in a size 98cm.  I’ve made before in corduroy.  It’s perfect and I knew it would fit.

Next problem, how to get the design onto the thick, dark fabric.  Tracing was out.  The pattern suggested waste canvas but seriously, the idea of pulling all those teeny-weeny canvas threads out after I was done was *not* appealing.   I could have pricked and pounced (Mary Corbet has some great ideas for transferring embroidery designs, btw) but I was really looking for easy.  Painting my lines on with water colours doesn’t scream easy.   So I went another (far less traditional) method and used water soluble stabilizer instead because that’s what I had on hand.

As a result of my experiences embroidering this jacket, I will definitely use this method again.   The stabilizer is clear and thin; I was easily able to trace the design.  Here you can faintly see my pen markings, as I complete this hollyhock. 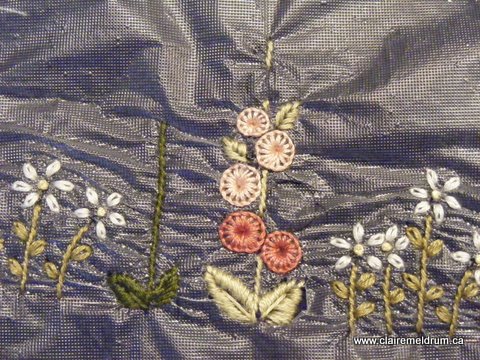 It was a breeze to stitch through.   To hold it in place, I simply basted it down around the perimeter.  Typically, I stitched stems and leaves, then blooms.  The only exceptions were the daisies (french knots first) and the agapanthus, which I found were much easier to complete if I stitched the yellow round of french knots first.  Last but not least came the grass, which I’m still finishing up. 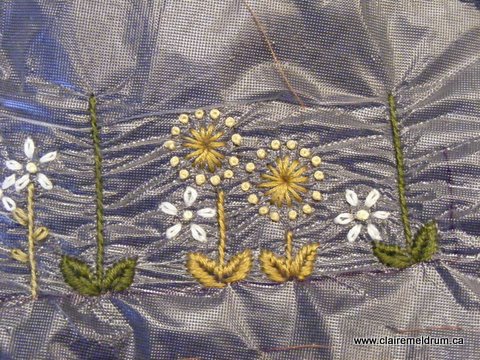 Now that I’m nearing the finish, the excess simply tears away and all the small bits caught under my stitching dissolve in a cold bowl of water.

And because I’m always interested in seeing the backs of things, here are a few shots of the wrong side, liberally adorned with white cat hair.  (Note to self: Don’t start a dark navy project and lay it over the back of the sofa whilst the calico is in the process of shedding winter coat.  Very visible results :)) 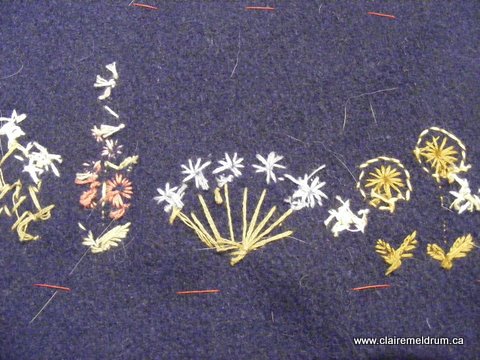 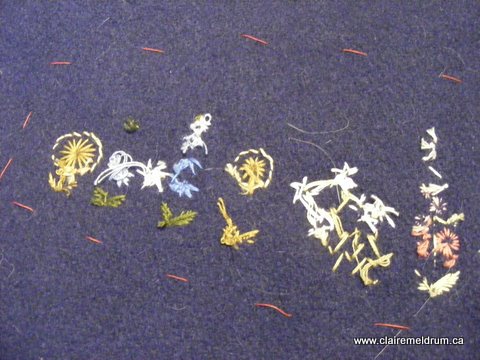 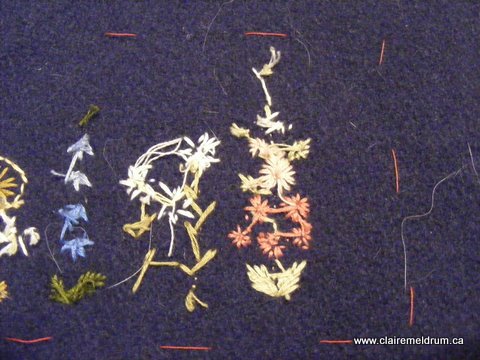 I did shape the embroidery because the swing coat has quite a pronounced curve but it won’t be nearly so evident on the finished coat.  It will look straight, trust me.  But in the meantime, look at all these scrumptious flowers, though. 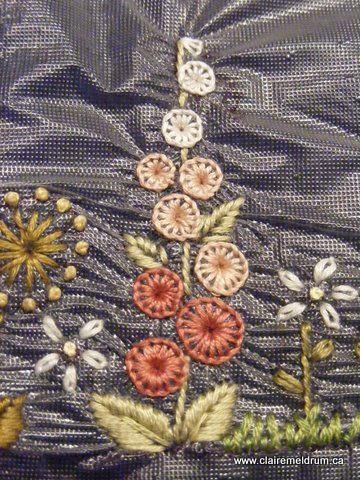 Queen Anne’s lace (btw, I took out this grass that you can see in this picture and the one above – it was too vibrant for the rest of the colours and drew attention to itself.  I’ve since replaced it with a WDW overdyed floss – much nicer) 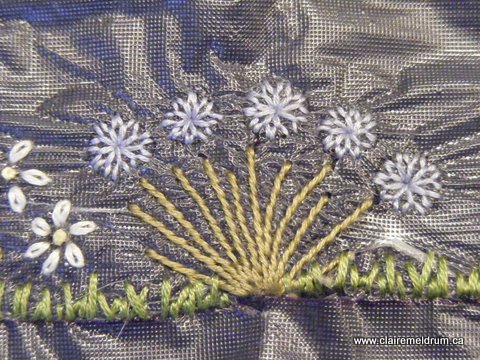 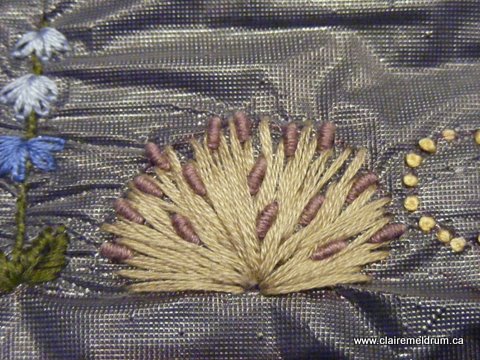 Two agapanthus.  Or is it agapanthi? 🙂 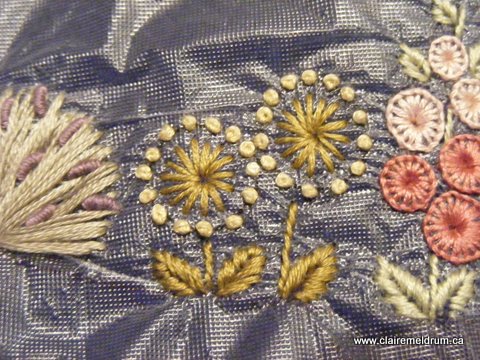 Aren’t the flowers delightful?  I really do love the way this project is turning out.   I did change my threads – the original is worked in crewel wool, but I used DMC embroidery floss, since it would have cost a significant amount to buy all of the required shades for a one off project and I  just don’t do enough stitching with wool to justify it.  In my next post, I’ll be sure to show you the embroidery when it’s free of the stabilizer and then show you some of the construction details of the coat itself.