Is it spring yet? I don’t know. It’s March now but the temperature has been all over the map. Below freezing one day, soaring the next. It’s enough to give a person whiplash. All I know is I’m tired of winter clothes.  I want flowers and warm temperatures and no heavy coats. 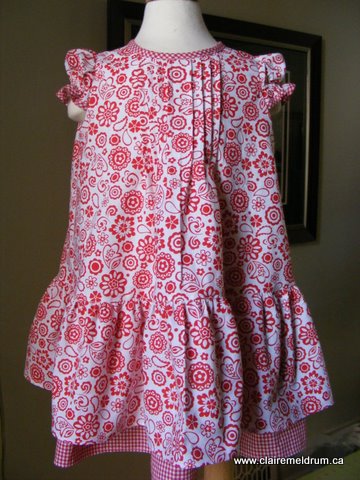 So last weekend, I whipped out my Ottobre’s and traced off a whimsical spring dress called “Petunia” from the Summer 2008 magazine.   Here’s what their version looked like:

As normal for Ottobre, the fit is generous.  I sized the pattern down to a 98cm (size 3) and although the height measurement is correct, it still fits comfortably on Stanley, who’s a 4.    I’m not too worried though, since everything was stash. I picked up the bright red and white floral last year on the discount table, because I’ve long had my eye on this dress (1m for $3) and the gingham is leftover from my shopping trip in Paris last year (I used the rest for a Hallowe’en costume).   I keep promising myself that I’ll cut back on the fabric expenditures and only sew with existing fabric.

Interested By-Stander: And how’s that working out for you, Claire?  Have you stopped buying new fabric?
*crickets chirping*
Claire: Err….If you’d care to direct your attention back to the new dress… 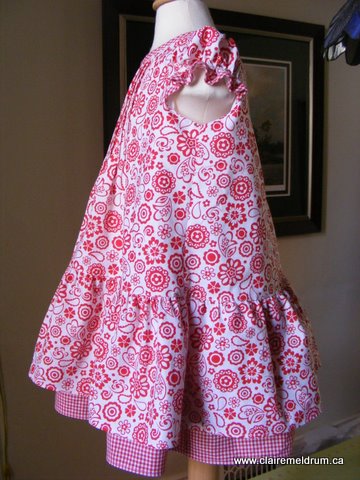 The sleeves are a cute cap sleeve with elastic.  They were super easy – I might be tempted to use them on other patterns because they make a nice change from the usual puffed suspects.  I trimmed the lower edge with bias – I thought I needed a touch more gingham. 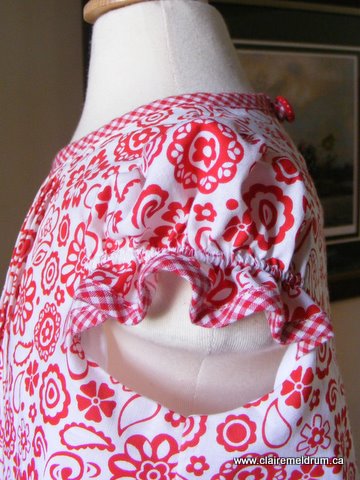 There are a series of release tucks around the neck.   I do find they get a bit lost in the business of the fabric.  When I make this dress again, I think I might consider a solid colour so the tucks can be more of a feature. 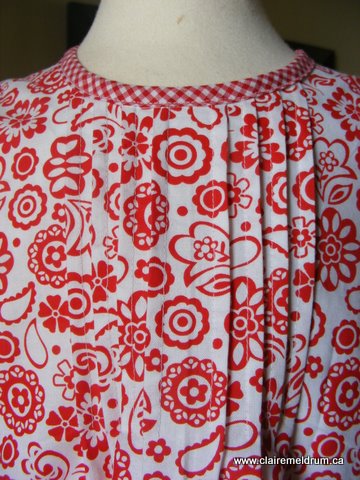 Rather than extend the bias binding into ties like the sample garment, I chose to make a button loop.  I think it looks neater and I always worry a little about choking otherwise, when you have long ties like that around the neck. 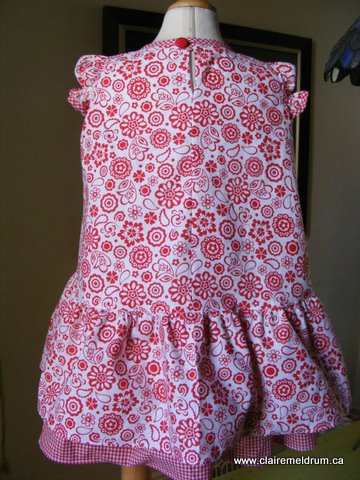 The most interesting feature of this dress is the petticoat and ruffles.  The armscyes are finished using the petticoat.  You sew around the armholes, sandwiching the cap sleeves between, but leave the side seams open.  It’s the same as when you clean finish an a line jumper but simpler because the skirt and the petticoat (or lining) are separate at the bottom you don’t need to leave a hole for turning.   It’s very clean, especially once it’s understitched. 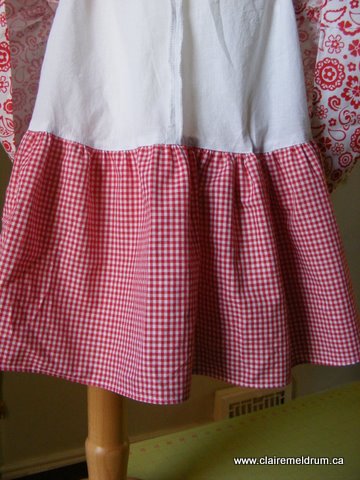 Here’s a shot of the deep gingham ruffle.  Because the two layers are separate from the neckline down, there’s a great deal of loft to the dress – good twirl is so important. 🙂  I even tried my hand at bow making.  Nothing too spectacular, mind you, but two little gingham bows with red button centres are now awaiting their clips.   Making the dress was fun and it gave me hope that spring *is* coming, however sporadic that progress may be.