Posted by Claire on Mar 11 2011, in Quilting, Sewing for Children

My oldest, who’s seven, *loves* music, the louder the better.

Since we moved into our new house a few months back, he’s been reveling in having his own room and planning all sorts of ‘improvements’ to make it the ultimate pad for boys.  I’ve promised him that over the summer, he can help me paint his room, which currently sports some rather baby-ish blue wallpaper, courtesy of its previous occupant.

So when I saw this fantastic Michael Miller guitar print, “Jam Session” I knew it was for him. I just wasn’t sure what I would make from it, so I book marked it and waited for inspiration to strike. It did a few days later, when I’d gone shopping BY MYSELF! 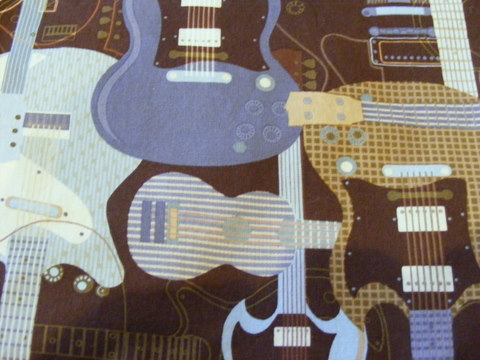 (Those of you who are parents know what I’m talking about – it didn’t matter that I was only purchasing toilet paper, a toilet brush and an industrial sized bottle of shampoo. The excitement lay in pushing that cart, up and down the aisles, as slowly and leisurely as I wanted, and not having to say any of the following: “Young man, I thought I told you to keep your hands to yourself”. “Didn’t I remind you to go pee before we left?” and “For the eight hundred and thirty second time, we are not getting the Super Zoomer Ultra-Fast Light Up race track, so there’s no point in asking.” )

In the midst of this, I decided to roll by the magazine display. This is not something you can do when you’ve got kids in tow, either – they’ll either disassemble the entire lower rack in 3 seconds, find magazines with pictures I’d REALLY rather not have to explain for a number of years yet, or want to see everything you’re flipping through right away, jumping up and down and saying “canIseecanIseecanIsee?”.

So taking advantage of my alone time, I started to browse.  And then there it was, the perfect quilt for David’s room, in the February issue of Quilter’s World.  “Diamonds” is a nice, straight forward pattern, contemporary with deep brown centres, perfect for showcasing the guitar print, and not so complicated that I’d be finishing the sucker off just as David prepared to leave for university.  In fact, the whole issue is very nice and there are a number of quilts I really admire and can see myself making. 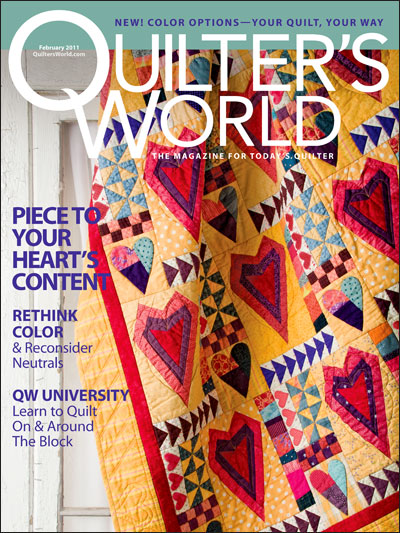 Now that I’d found the pattern, it was time to hit the stores to source the fabrics. I changed the colour scheme up, from the green, white and dark brown to a brown, grey and cream scheme, but I was able to find fabrics that really kept the value and print styles really well, especially since my main print had a lovely range of colours to choose from. I ordered the guitar fabric from Hawthorne Fabrics, when I ordered the Maharaja print I used for my friend’s chenille quilt and then purchased the remainder of the fabrics locally. 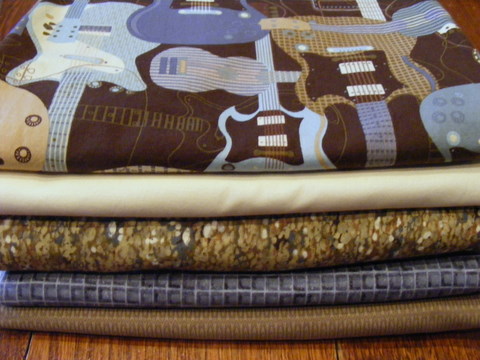 I’m actually making two identical quilts, since David has bunk beds in his room. It took me several cutting sessions to get everything done but now, everything is cut and labelled, ready for me to get started. 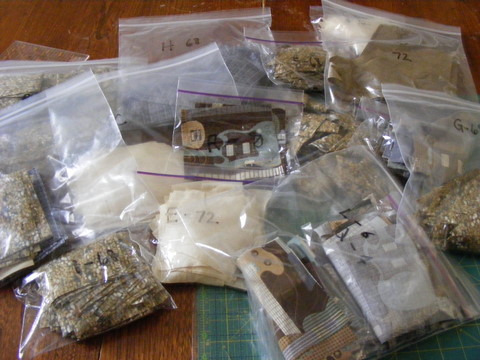 It’s a heck of a lot of pieces, laid out like that, but I know it will all come together in the end.  Maybe this weekend, I’ll start in on the components. It’ll be fun to make something boyish for a change.  Not that smocking isn’t my first love, but a change every once in a while is good for the soul.