Posted by Claire on Nov 18 2014, in Holidays, Sewing for Children, WIP

No, I haven’t take up another craft. 🙂  It’s just been a bit hectic here and I haven’t made huge strides on any one project, so today’s post has a bit of this, a bit of that. 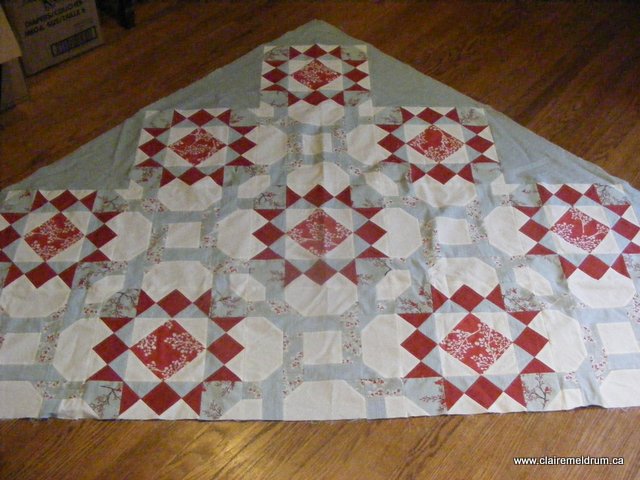 Making good progress on my winter themed quilt.   Here’s where I’ve got to with it.   Three more rows to sew together, plus the borders still remain.  You can really see the weaving effect once the alternate blocks are put side by each. 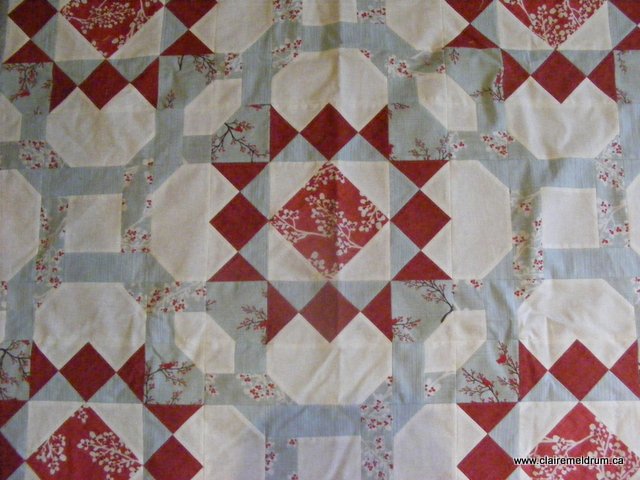 I’ve finished all of the individual blocks and have started sewing them together.  If I had a diagonal bed, I could just call it a day, but I guess I’ve got to keep going and finish things up, eh?

I was also able to fix my backward blocks that I mentioned in my last post.  I had to rip right back to the centre square, press them and reassemble.  It wasn’t tons of fun but it wasn’t as onerous as I’d feared, either. 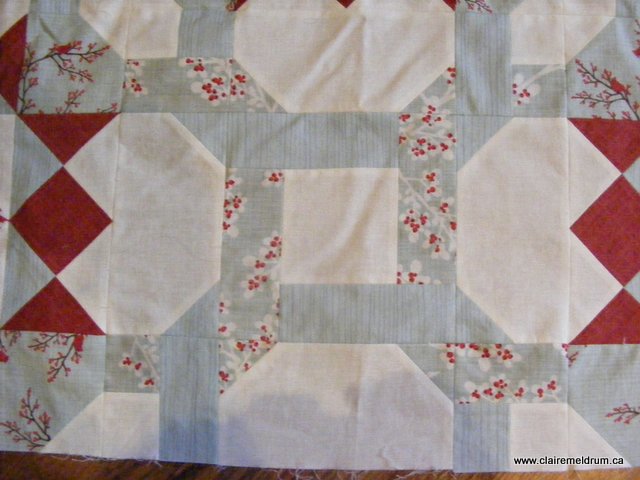 But of course, I haven’t just been working on quilts.  Hallowe’en always looms large in my fall sewing plans.  The boys’ big night was successful (the ability to secure your body weight in sugar, chocolate and fat defined as ‘success’).  David, who’s coming to the end of his trick-or-treating career went as Hiccup from How to Train your Dragon.   I drew the line at making him a dragon, too.  He thought this was a perfectly reasonable request.  However, when I told him I’d do it, but I’d charge him 50% of his candy haul, he reconsidered.  Negotiating tactics are so critical in the pre-teen years 🙂  I made the pattern for the tunic and the leather jerkin, and cannibalized a thrift store leather purse for the hardware. 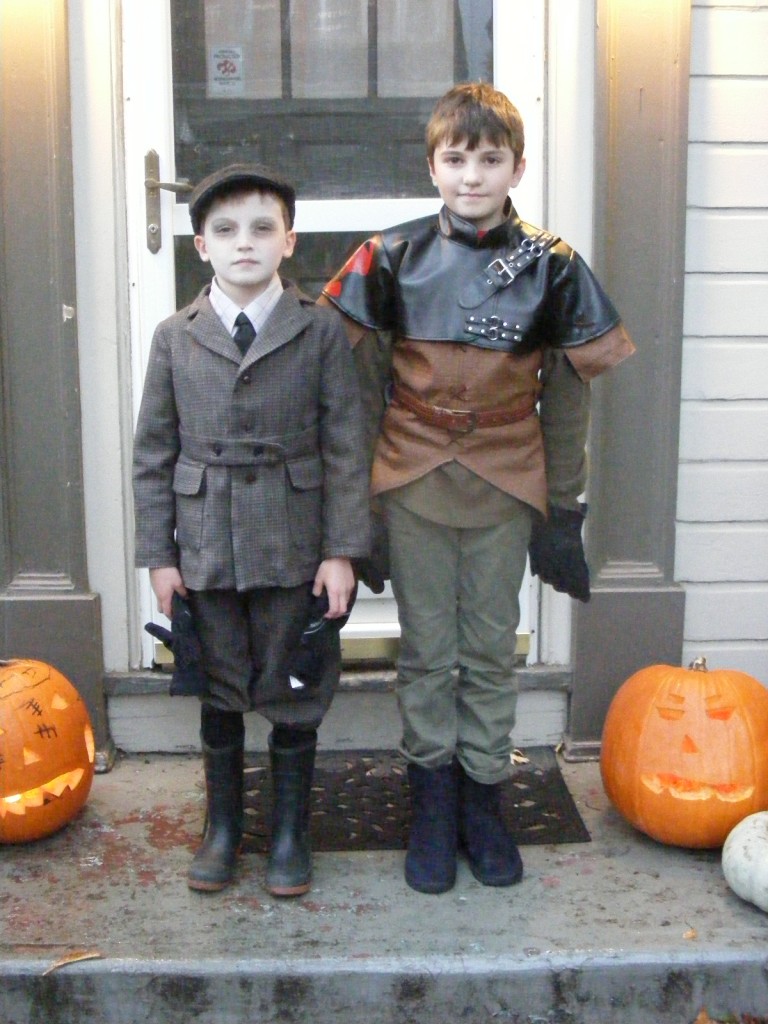 And Andrew?  He went as a Gashlycrumb Tiny.

No?  Not ringing any bells?  Edward Gorey, 20th century American illustrator, is best known for his macabre ink drawings of vaguely Edwardian children, in an alphabet where everyone meets a terrible end.

A is for Amy who fell down the stairs. B is for Basil assaulted by bears. You can see the fate of all twenty-six ill-fated tots here.  My kid went as one of the soon-to-expire kids (he was torn between Hector, who’s done in by a thug, and Edward, who choked on a peach.  My fav is definitely Neville, who dies of ennui).  Completely obscure but he loved the suit and that’s what counts.   He had to wear rainboots while he trick-or-treated because of the weather but at school he’d just worn black shoes.

The funny part for me was the costume.  It really *is* a vintage design. 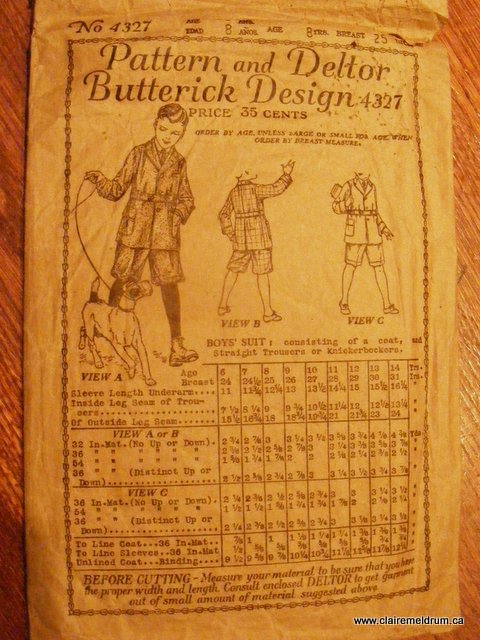 I picked it up on ebay for $8 bucks, got some really cheap acrylic wool-look a like, and then banged out the suit (handwork on a Halloween costume!  Not in this lifetime).  Then we completed the look by pairing it with an old pair of soccer socks and a shirt and tie we already had on hand. 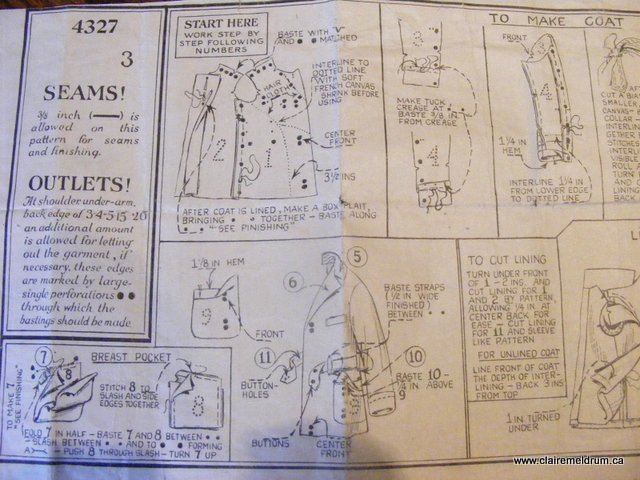 There’s something very amusing to me as an heirloom sewer when this is what I end up putting my skills into.    He had a blast – the hardest part for him was to look suitably dour – he doesn’t do mournful very well.  Loud?  Excited?  Full of enthusiasm?  Yup, but not mournful.

And finally, in a brief toot-my-own-horn moment, my teal and ecru wool dress is gracing the cover of the latest issue of SAGANews. SAGA members can expect to get their issues shortly – I understand from Julie that they were mailed out this week. 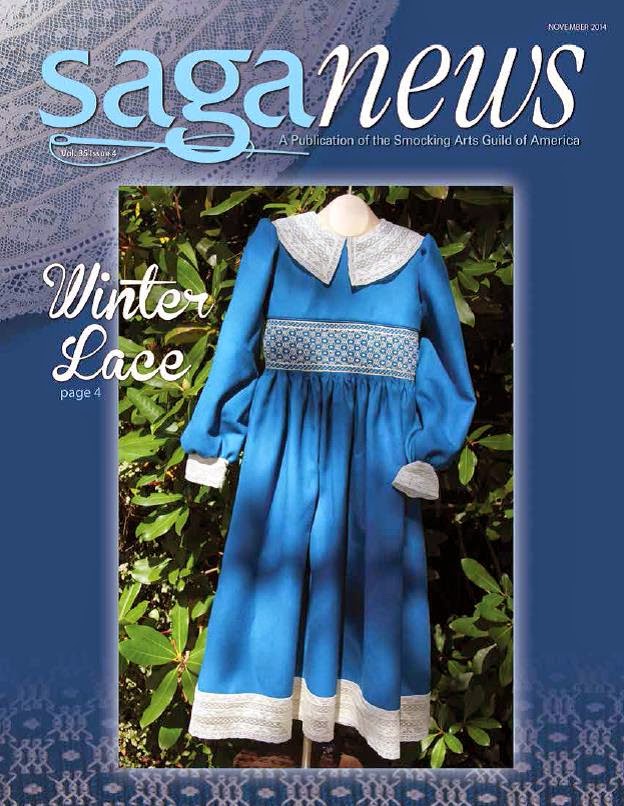