Well, hoorah for me.  I’ve just heard from the PTS (that’s the Powers that Smock, btw :)) that I’ve passed Smocking Level 1 in the  SAGA Artisan program.  For those folks who aren’t familiar with the artisan program, it’s a self-directed, self-paced skills program, that allows you to earn points for workshops, publications, certain competitions and the like for skills including smocking, heirloom sewing and embroidery.    It took me about two years to complete the first level, but I wasn’t rushing and since I’m out here in the boondocks, I didn’t earn many points from workshops, which might have sped the process up.

Here’s the sampler that I completed as part of the evaluation process. 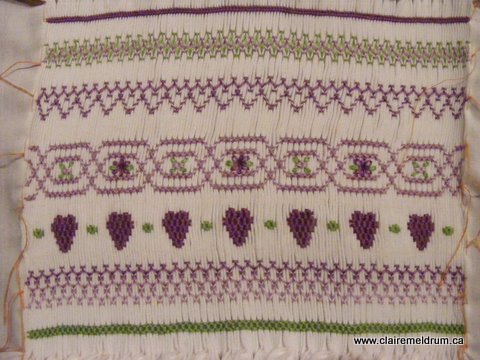 I’m not doing this for any specific goal but rather for the personal satisfaction I gain from it.  Keeps it fun.  It’s still a bit nerve wracking, making sure every stitch is as perfect as I can make it and that I don’t catch any gathering threads and my ends are all less than 1/4″.  Suffice it say I’m not usually quite so vigilant on my personal projects – it’s sort of like being a show horse, standing in a ring, under the glaring lights, while your flaws are highlighted in excruciating detail.

The parameters of the sampler are set out in the Artisan handbook and dictate everything from the size of the fabric and its fiber content to the stitches used on every row.  I did get to choose the colours though – I like the bright purples and greens.  I think they look very cheerful against the white fabric.

I had to execute outline and stem stitch on row 1, then a cross-over wave stitch below that.  Then there were two rows of wave and trellis, which formed a heart shaped band. 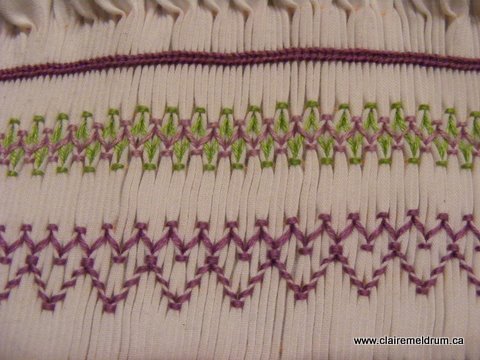 The centre of the plate was more complicated.  It featured a mirrored cable/trellis combination, plus small accents:  a detached chain flower and some light purple flowerettes.  Consistency was important and I spent a lot of time making sure all of the elements were exactly the same. 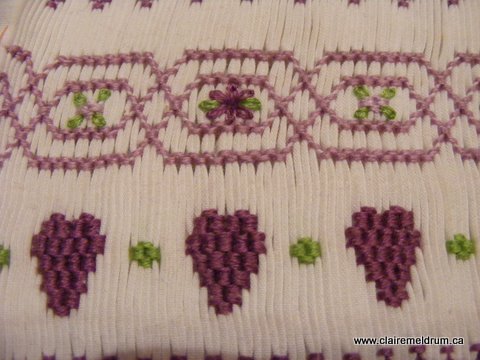 The picture smocked hearts were worked with four strands of floss.  The dark colour did make the stitch out a little challenging, since the contrast between the fabric ground and the floss was significant and any unevenness was instantly apparent.  But I perservered and I think they’re quite cute. 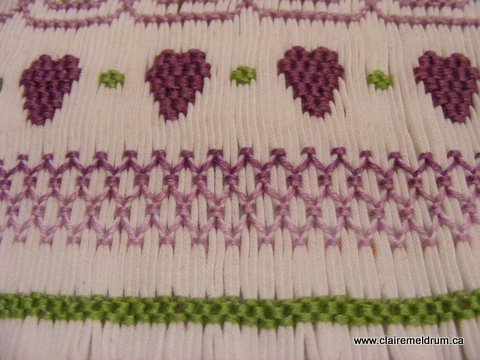 Finally, I worked a three shaded rows of half space wave and two rows of stacked cable.  The gradient is something I really like the look of and I expect I will use it again in other projects, since it’s a very distinctive look. 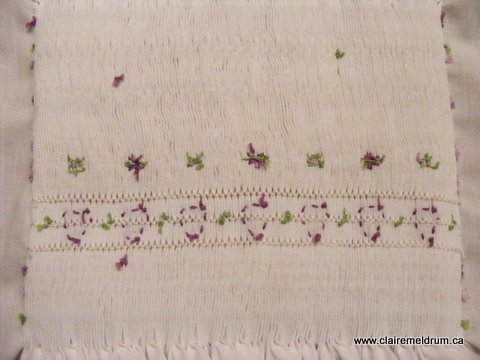 And in case inquiring minds want to well, inquire, here’s the back of my sampler.  Not the most gorgeous thing to look at but then the back of smocking rarely is 🙂

I’ve also worked a gingham sampler, which I hand pleated.  There, they’re not looking for smocking stitches so much as the regularity and proper preparation of a more difficult fabric.  I actually find hand gathering rather satisfying.  You do get a rhythm going – in, out, in, out, pull thread through – that can be quite relaxing.   I look forward to seeing what the adjudicators had to say and getting my second level under way.