So you know that post from two weeks ago, when I mentioned I wouldn’t be posting for a couple of weeks, due to my taking some family time?

Well, the part I didn’t mention was I actually went to France with my son and some of my extended family on holiday.

Saw the big, iconic tower, the enormous above ground cemetery, Père LaChaise, where the famous and not so famous are spending eternity (they hope!), the even bigger palace where Marie A and the kings of France spent their summers once upon a time (although frankly, I think calling Versailles ‘big’ is a bit of a misnomer – it’s the biggest thing I’ve ever seen in my life. It’s so big, its scale simply boggles), and lots and lots of very old, very gorgeous other things during the two weeks we spent in the country – Sainte Chapelle, Chenonceau and the Abbey at Fontrevaud were among our favourites. Although the mushroom museum in Saumur definitely won for the weirdest, most strangely fascinating thing we went to see! 🙂 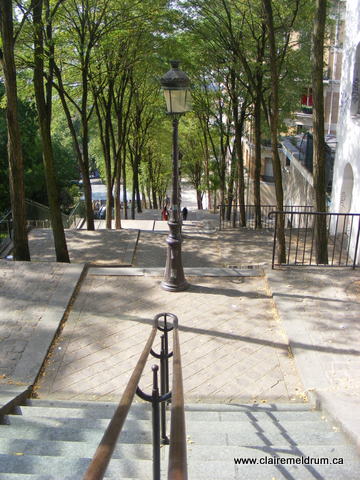 And did I mention I went fabric shopping?

Bold and italics don’t do it justice. Lucky for me, our hotel was in Montmartre, which is in the north-western part of Paris, and home to the best known fabric district, located at the base of Sacré Coeur Basilica around the Marché St. Pierre so I didn’t have far to go. 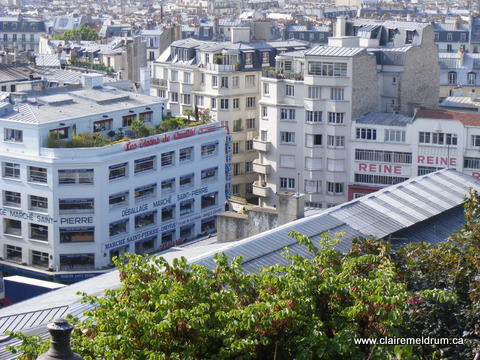 If you’re going and your hotel isn’t quite so fortuitously located, the Anvers metro stop on the M2 line gets you right where you need to be.  Then, simply walk north up the hill, towards the basilica and you’ll soon find yourself surrounded by fabric, notion and trim shops, which dot the tiny cross streets.

Certainly, the most famous shops are Tissus Reine and Marché St. Pierre and I visited both.

Reine, for my money, was the finest all-round fabric shop in the district.  Beautiful.  Georgoeus.  Drool worthy.   Even at 10 o’clock on a Friday morning, the shop was packed.  I’ve never, in my life, seen a fabric store as busy in Canada, except maybe during a huge sale.  And according to the very nice clerk who cut my fabrics, it wasn’t really busy at all.   “After all,” she said in all seriousness, “It is only when they are waiting three in a line for me to cut their fabric that it could be termed ‘busy’.”  Oh.

My only rule as I was browsing was I was only buying things I couldn’t get at home and that I loved.  They had a huge range of to die for shirtings, in colours ranging from mauve to yellow to peach, Liberty of London cottons, silk, wool, lace, cotton, corduroy, suitings…There was such a wealth of choice but I tried to restrain myself.  Frankly, just browsing was a pleasure in itself.

Now, wait til I tell you about the second floor. 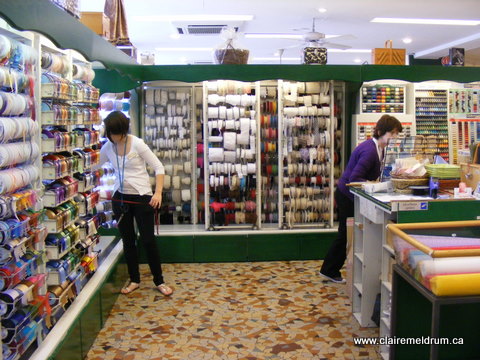 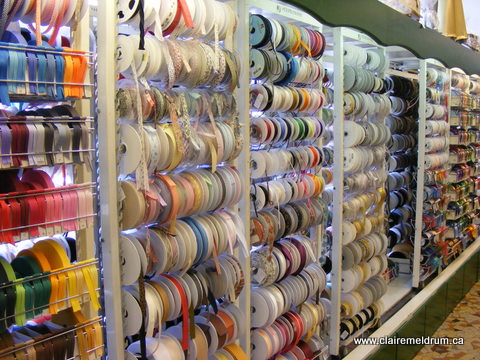 It was like having a religious experience.  Seriously, I swear there were golden beams streaming from the heavens and a couple of times while I was browsing, I heard angelic harmonizing.   Because they had Liberty of London bias binding.  And lace.  And swiss embroidery.  And so many buttons.  Big.  Little.  Bone.  Handpainted.  Metal.  Buttons make me a little crazy – they just push my “I want them all” button (sorry, couldn’t resist) 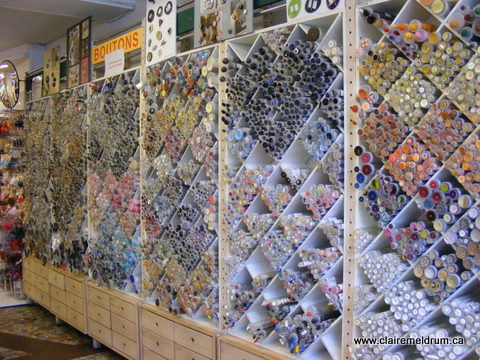 When I was done buying my bits and pieces (I would like it entered into the record I exhibited near saintly restraint!), I asked the clerk if I might take a few pictures of the trim department, to remember the glorious things I’d seen.  She was mystified, as was the department head, an immaculately dressed Parisian of a certain age.  Luckily, I speak French and despite the fact that I appeared the world’s biggest rube with my camera in hand, I pleaded my case.  Finally, she relented, chalking it up to the quixotic whims of a tourist with a thick Quebecois accent and let me take a few precious snapshots, which I share now. 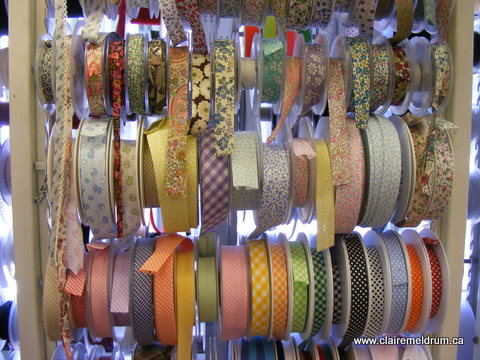 I was less impressed with Marché St. Pierre.  It was also crowded with shoppers but the fabrics simply didn’t seem as outstanding as the ones I’d seen in Reine.  There were silks and linens and wool and a lot of lycra and household linens (teatowels and the like) but nothing out of the common way, the lighting and layout were far more warehouse-y and all in all, I didn’t see anything I couldn’t have sourced from my local shops in Canada.  That’s not to say people who don’t have access to larger stores wouldn’t find anything there but it simply wasn’t the highlight for me. 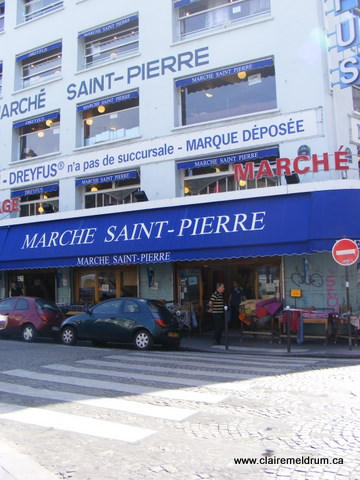 The other store I adored though was Moline, which is down the street a little from Marché St. Pierre.  It was trim central specializing in what the French call ‘mercerie’ and ‘passementerie’.  I could have done nothing but buy trim in every colour under the rainbow.  Feathers and flowers and lace and silk and everything yummy.  They also had real wax resist African fabrics, a stunning collection of “le patchwork” as they call quilting cottons and truly superior millinery supplies, including straw cloth in at least a dozen different colours.  And their buttons weren’t too shabby, either!

Then I simply wandered.  I saw shops that specialized in zippers, in leather, in dance fabrics, in silk.  Something for everyone in other words.

All of the big shops also have “Coupon” outlets.   Coupons are what the French sewers term their 3m offcuts and discontinued fabrics and they’re steeply discounted – I saw prices between 10 and 12 Euros for most cottons and 20-25 for more exotic fabrics like silk, wools and suitings.  A bit of elbow grease and willingness to rub shoulders with other searching sewers is necessary to shop there but I was very impressed by the quality of all the fabrics I saw  – they weren’t soiled or poorly presented or seconds as you might expect.  And 3 m is a lot of fabric – enough to make almost all adult sized patterns if you cut carefully.

It’s more hands on than in Reine or Moline’s regular stores but if I was visiting or living in Paris regularly, I know I’d visit them before I did the higher end stores.  I got a beautiful blue print knit for myself and a wonderful pink and white print (so fine, it’s very much like a printed batiste) from the coupon counters and love ’em both.

So that was my happy, happy day.