Stitching in Michigan with Wendy Schoen

I spent the weekend before last away in Michigan with my friend Debbie, stitching. 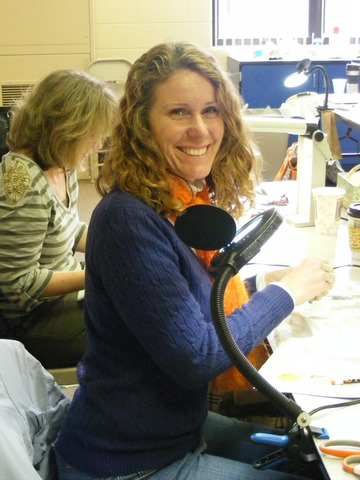 We met two years ago at the SAGA conference in Indianapolis and hit it off immediately. We had great plans to reunite at Norfolk this year but my husband’s work responsibilities meant I had to miss it this year. We were both bummed, so when she hit upon the plan of meeting in the middle, I was all over it.

She travelled up from Wisconsin with her adorable daughter, Nora; I travelled west and crossed the border at Windsor and we spent 2 1/2 days getting reacquainted and having far, far too much fun. It was all organized by the Great Lakes Smocking Guild in South Lyon, MI. A lovely bunch of ladies, many of whom I had met in Indianapolis and with whom it was great to catch up. 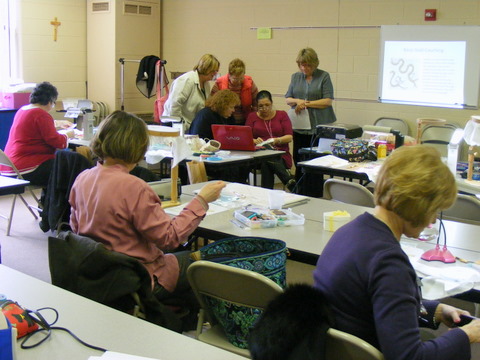 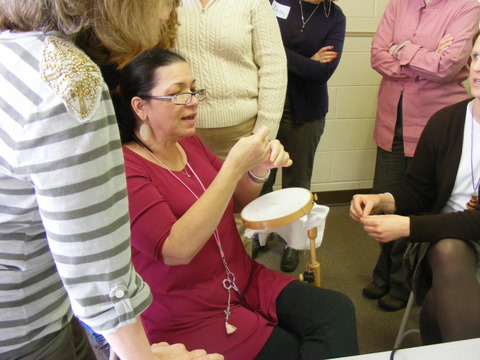 Wendy Schoen was teaching the classes. Unfortunately, I couldn’t attend the Thursday and Friday classes but the samples Wendy brought were beyond lovely. Wendy is a ball of concentrated energy and loads and loads of fun. Her instructions were wonderfully clear but it was the hands-on demonstrations that were particularly valuable in my mind. 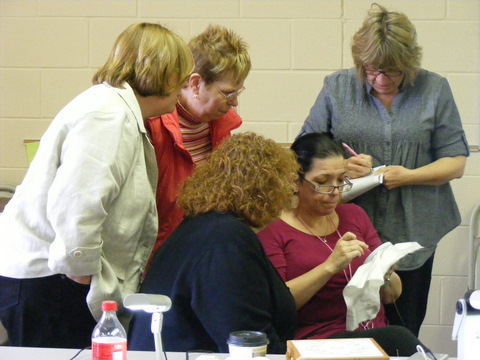 I’m making the Le Jardin scissors case. It’s worked on a fine white silk, with shadow work and a touch of gold work. Now admittedly, I’ve got a bit left to work on, but the nice thing was the project was sized just about right. Big enough to really get a feel for the shadow work, but not so big I would take it home and shove it in the drawer with the other class UFOs. 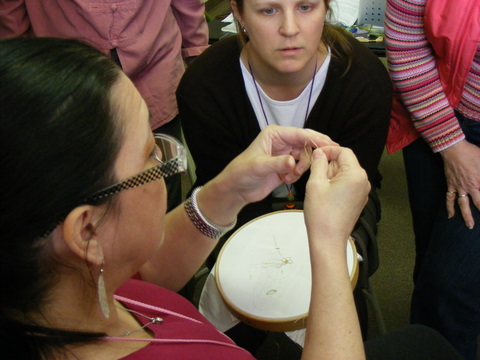 Here’s what I got done during the class (OK, I got a little bit further than this, but I forgot to take more pics so you’ll just have to take my word for it!)   The flowers and leaves are shadowwork, done with a single strand of floche. 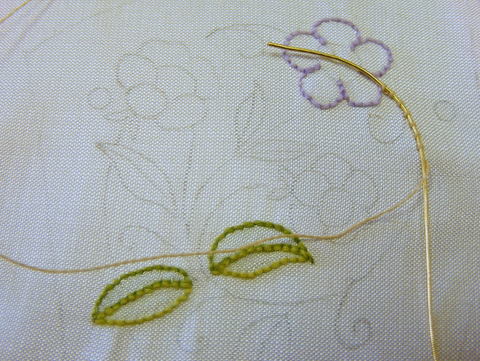 I like how the leaves are worked in two shades of green – they’re very light, spring colours and even though they’re teeny-weeny (smaller than a penny), the variation makes the leaves really delightful and multi-faceted. 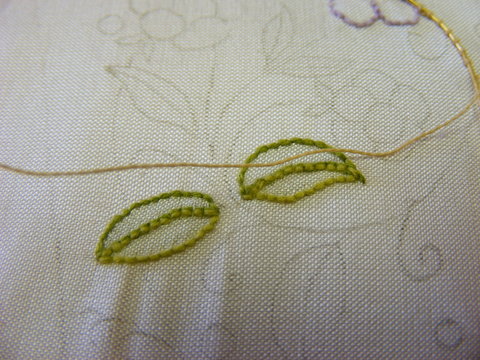 The stems are goldwork, which I’ve never done before.  This passing is couched down with a single strand of DMC floss and then the ends are plunged and secured on the back side. 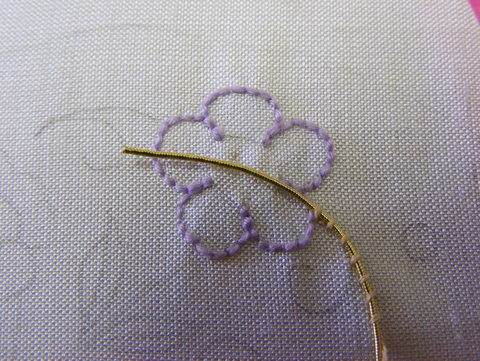 I can actually see myself finishing this (says the lady with the half a dozen spring and summer projects at various stages of completion.)  Debbie and I had a lovely time and we’ve decided to see if Debbie can’t make it north this summer, so we can get together again.   That would be a blast.

Now this next bit is a total non-sequitur but I was so amazed by it, that I’ve told pretty much everyone who’s asked how my weekend went. About half way through the day, one of my table mates, Diane, was lamenting the fact that she hadn’t known I was coming from Canada. If she had, she would have asked me to bring her some buttertarts.

“In Krogers. Sometimes. But they’re not the same thing. And the bakeries around these parts never make them, either.”

(This is probably why Wendy told us we would have made more progress if we hadn’t been chatting all the time :))

“What’s a buttertart?” The woman sitting at the table in front of us turned around, no doubt tempted by all the drool-wiping-miming that Diane and I were doing.

“Never heard of it.” And when I polled the room, only one of the women – Diane, who’d experienced them in Canada – knew what I was talking about.

Well, you could have driven a truck through my open and disbelieving mouth at that discovery. I mean Michigan is right next door to Ontario. I’d understand if they’d never heard of them in Hawaii or Arizona, but every Michigonian I asked for the rest of the day had never once had a buttertart.

Seriously? Really seriously? South of the border, 330 million poor people deprived of buttertarts? You poor lost souls. I mean, hey, they even have their own Wikipedia entry. And a CBC radio program with Peter Gzowski, the late, great interviewer, about this intrinsically Canuck dessert.

Because frankly, life wouldn’t be worth living IMHO, if it didn’t include the buttertart. That light flaky pastry, the slight ooze of the warm filling, the plump raisins all sunk down on the bottom. As Homer Simpson would say…MMMM

So, as part of my self-adopted mandate to spread the gospel that is the b’tart, here is what a buttertart looks like (although, if these were being made by Grandma Meldrum, I have a feeling she’d raise a brow at the thickness of that pastry – scant 1/4″ and no more, otherwise the ratio of filling to pastry get totally skewed.)

Now there are as many variations as there are cooks (you can’t go to a church supper without at least three dueling recipes!) but for my mind, simple is best. No coconut. No chocolate chips. No chopped fruit. Blech. Blech. Heresy. Just the raisins (and nuts, if you absolutely have to), all topped off by the scrumptious, sugary filling. That’s a buttertart. And no, before you ask, store bought ones aren’t the ‘real’ thing. It’s like eating McDonald’s and saying you know what beef tastes like. There’s just no comparison 🙂 Make some classic Canadian buttertarts. You can thank me later!