Posted by Claire on Feb 24 2011, in Quilting, Sewing for Children

I’ve been feeling a bit bogged down lately. What with the weather (cold, grey and snowy), work, writing commitments and a pile of UFOs that never seems to get any tinier, I needed a project that was easy, quick and cheerful. 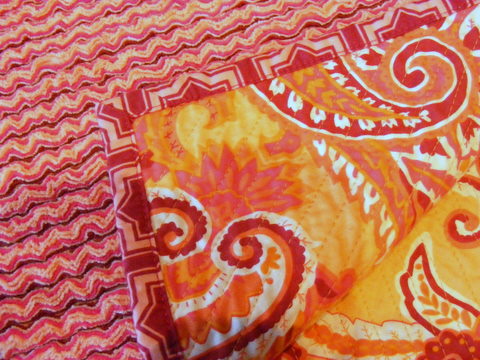 When a friend posted a link to this nice tutorial on Aesthetic Nest for a faux-chenille afghan, I knew it would be the perfect project for a friend who’s expecting a little girl in the spring. 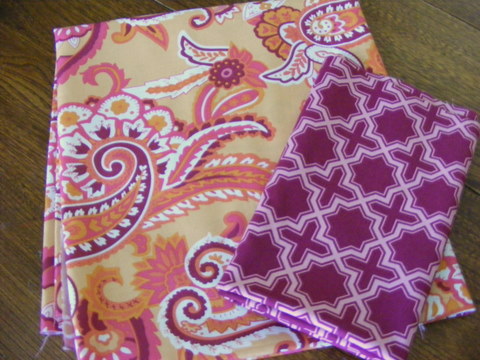 So, wanna know how lazy I was? 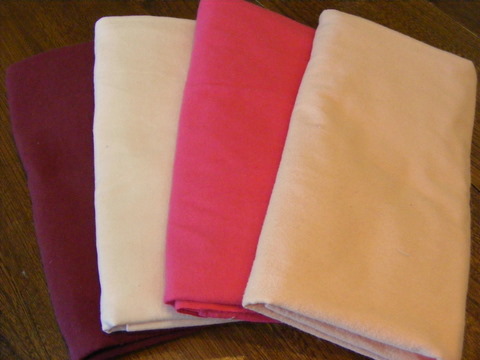 Well, first off you’re supposed to cut the base fabric into a 45″ x 45″ square. Yeah, too much work. I’d bought 1 3/8 yds of all my fabrics, so I just laid ’em on top of each other and figured that was good enough. Then I didn’t even mark the diagonal.  I didn’t wanna go hunt for the yardstick. I just took the peach layer to my ironing board, folded one corner down and pressed it along the 45 degree angle.   I just stitched along the fold for the first row and then every 1/2″ away from there. The only thing I did do that might be construed as “responsible” sewing was pinning the layers with safety pins every 8″ or so.  But even that wasn’t really being anal.  It was just me, knowing that in the long run, it meant I wouldn’t have to rip out my stitching when I sewed two layers together in a big bunch.   So it was a lazy man’s time saver, if that makes sense.

Seriously, I wasn’t sweating the details on this project.   As soon as the quilt was laid out, I sat down at my machine, and started to sew.

And two full spools of thread later, I was done. 🙂 It was kind of satisfying, just letting the fabric move under the walking foot and inch by inch, cover the whole surface with lines. 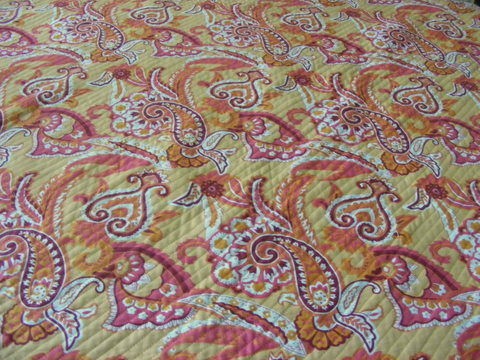 It didn’t matter if they were perfectly straight. Wobbles weren’t going to show anyway and even if they did, a baby’s going to drool on it and crawl on it and suck on it.  What’s a wobble in the grand scheme of things?  How’s that for philosophy? 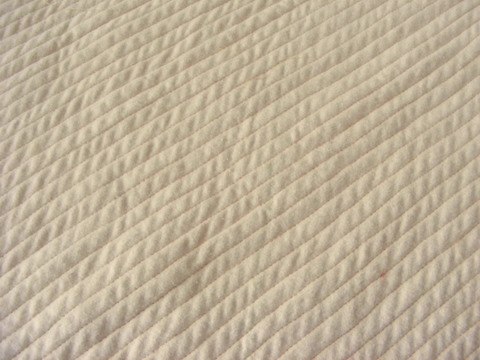 I bought a stacked cutter to handle the chenilling (Is that a word?  Well, it is now!).  I bought a really basic model – I don’t think there’s going to be acres of chenille in my future – but it did a great job.  It only took me about 1/2 hour to slice open all the rows. 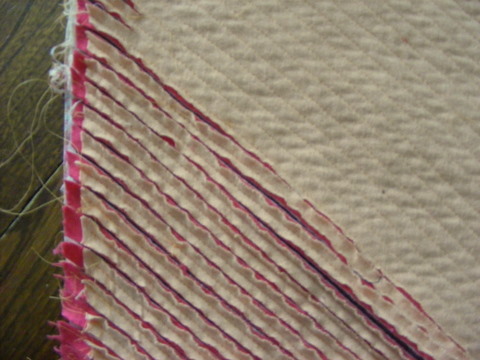 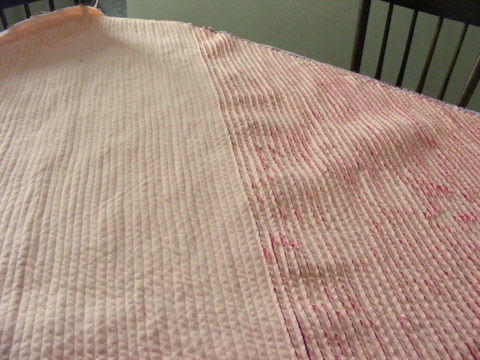 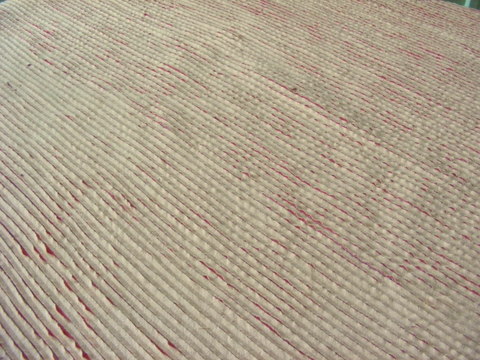 I love the fabric. It’s “Mahari” by Rosanna Bowles. I ordered it last week from Hawthorne Fabrics.   Gotta say, their customer service was  beyond excellent.  I ordered some of this great guitar print for a quilt I’m making for my son and somehow, this tangerine paisley just followed me home.  But it’s perfect for the nursery and it incorporates all of the colours that are going to be in the room, so I hope they like it. 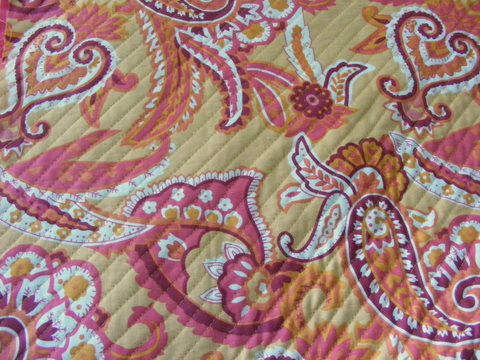 I started this yesterday afternoon. Two stitching sessions and one cutting and binding session later, it was done. I popped it in the wash and then the dryer. 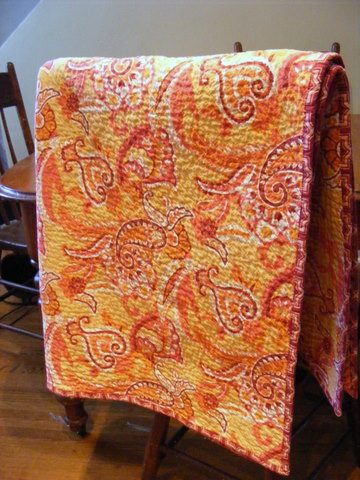 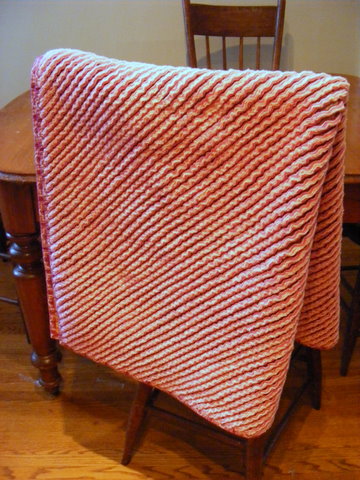 But I really like it.  I imagine it will fluff up even more with subsequent washes.    Couldn’t believe how much the whole thing shrank – a good two inches all around, at least.  But since everything wasn’t pre-shrunk, it all shrunk evenly and the binding didn’t go wonky or ripply.  That was the one thing I couldn’t be lazy with.  I picked out the fabric locally and I chose it for the colours, never thinking to check how it would work cut on the bias.  But when I got it home and laid it out, I realized I couldn’t cut it on the bias, because the pattern would be completely wonky and irregular and it would bug me. 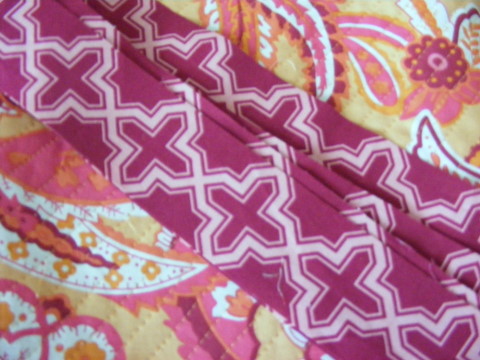 But I wasn’t going back for more binding and when I realized that the crosses were exactly 2″ high, I figured straight-grain binding was easier to sew anyway 🙂  I cut the strips and seamed them together. 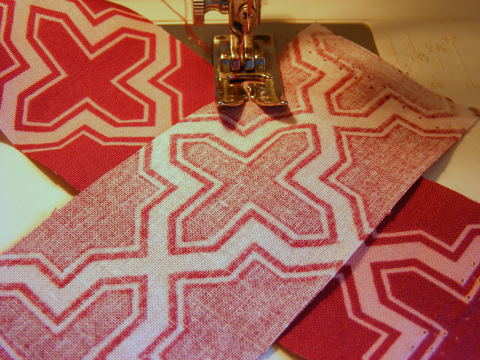 Because the print was perfectly symmetrical, it was easy to match the pattern. 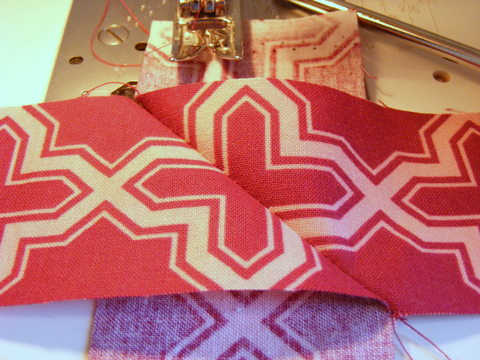 You really have to look to find the seams.   The straight-grain binding meant I could even skip a step – can’t do curved corners like the inspiration quilt when your fabric won’t stretch. 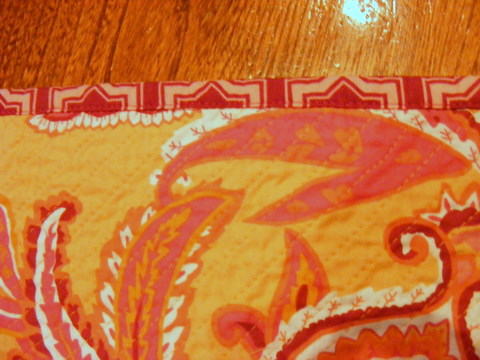 Sometimes, it’s OK to make something just because it feels good. And I’m satisfied that I have one project all done up.